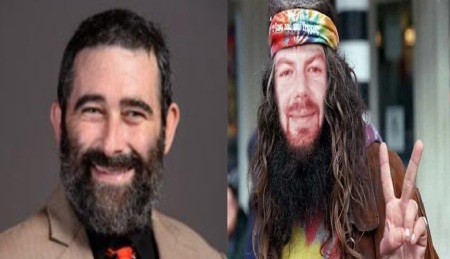 Over at RedefinED I dip a toe into podcasting with my old nemesis Sherman Dorn (wait…that makes one of us the bad guy right? Not it!) Dr. Dorn and I used to argue about Florida NAEP scores, but now we both live in the Cactus Patch. Anyway Dorn very kindly hosted me at Arizona State to record the podcast, which is in two parts, and (I think) we basically agree that public schools are over-regulated and seem to reach a consensus on a lighter footprint testing system. Along the way we discuss the 20th anniversary of Jeb Bush’s reforms and other stuff. Jayblog fans should take a listen: part I and part II.

Andrew Coulson has replied to Sherman Dorn on the productivity implosion chart. Turns out that I had been using an old version of the chart, and Professor Dorn has conceeded the larger point over the broad sweep of the spending and academic trends, but who doesn’t enjoy a tussle over methods?

"Forest?" We trees haven't seen one of those...

Sherman Dorn takes issue with Andrew Coulson’s spending/NAEP chart and my use of it. Just a reminder, here it is again: 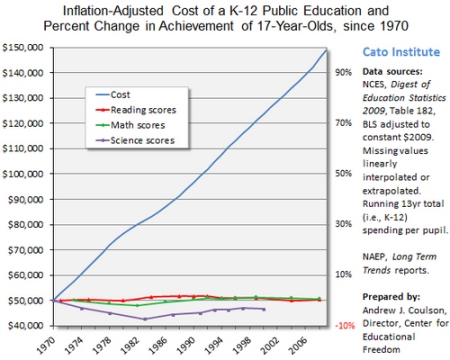 Because we spent less in the past than we do in the present, such a proceedure would be more appropriate for a projection of the future (with an inflator) rather than a documentation of the past. Dorn correctly notes that the per pupil numbers double rather than triple as implied by the chart pointing to the NCES source data. Unless Andrew is calculating some sort of net present value type of cost, Dorn seems to be on solid ground so far.

After that, Dorn’s post gets silly by taking the log function of spending data, etc. in a successful attempt to create a far more troublesome chart based on the same data.  Dorn however is missing the forest for the trees, even if he is right.

First note the absurdity of the phrase “only doubles” in practical terms. Let it breathe a bit, twirl it around in your glass, sample the aroma of it. When you partake of it, let it set in your palate for a bit before moving on.

What does a doubling of effort look like? Well, fortunately, all the charts in the post that Dorn ignored answer that question. Here they are again: 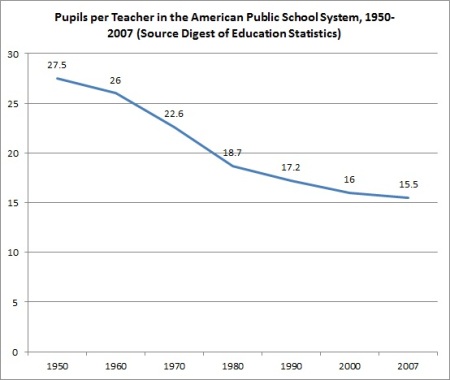 Yep, that looks closer to a doubling than a tripling all right, unless of course the real total cost of the average teacher has gone up rather than down over the decades. Teachers of course are a small issue compared to this: 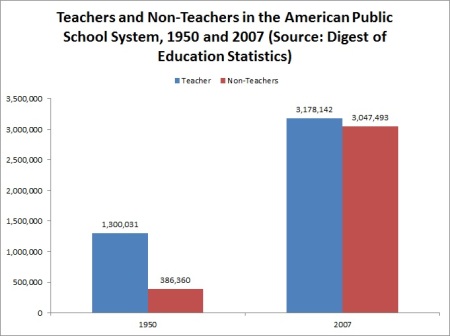 Oh, but not to worry- all these extra employees per student have vastly improved the quality of learning for our students. Err, except… 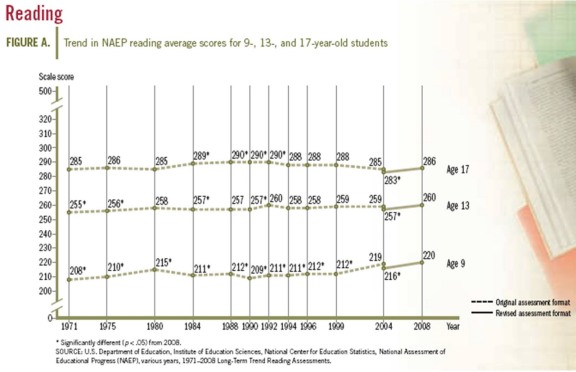 Hey no fair! The reading scores for 17 year olds may have only gone up one point despite a doubling of spending, but the math score gains have been better!

Umm…like a two point instead of a one point gain!

Bottom line: we’ve bombed our students with extra school employees and have very little to show for it in terms of academic outputs.

Now you won’t be getting any “fake but accurate” arguments from me. Unless I get a solid explanation from Andrew, which I still might, I won’t make any further use of the chart. These other charts make the point just fine.

The Unions Doth Protest Too Much 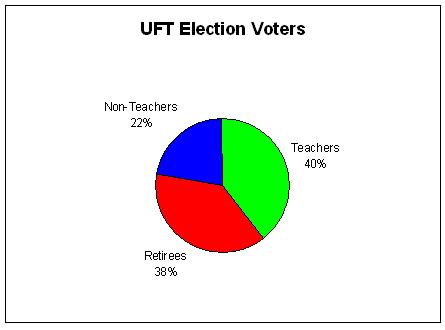 Wow, the graphic above seems to have struck a sensitive spot with our Sith apprentice, Leo Casey. Here’s his surprisingly defensive overreaction.

Leo thinks he has my motives all figured out. He thinks my post last week was trying to sow division within the union by pitting their internal constituencies against one another.

Er, no. I don’t think many UFT members read Jay P. Greene’s Blog, except the ones who are paid to.

Leo’s evidence about my motives consists entirely of a passage from a book written 20 years ago by people who have no connection to me. Oh, and he lists my affiliation as being with “the Milton Friedman Foundational Educational Choice.” Two words right out of five ain’t bad – at least by his standards.

You would think that a person who has been caught participating in eggregious political fraud and promoting scandalous calumny would be more careful. Or maybe you wouldn’t.

Sherman Dorn likewise misconstrues my purpose (although without the foot-shooting intellectual slapstick we’ve come to expect from Leo). Dorn writes of my post: “This is corruption! is the implication.”

Er, no. I not only didn’t say anything about corruption, I didn’t imply anything about it. There’s nothing corrupt about UFT representing more non-teachers than actual teachers.

Dorn invokes my status as a political scientist with hoity-toity academic credentials in order to sadly lament that I failed to provide an extensive discussion of the academic literature on different types of voting systems in my blog post. Well, let’s try to satisfy him by adopting some unnecessarily opaque academic jargon as we look back at the actual, clearly and explicitly expressed purpose of the post.

My post is what political scientists call “positive theory.” That is, I’m offering an explanatory model of the unions’ behavior. Why do unions invest so much of their effort in racking up a trillion dollars in mostly-unfunded pension obligations, rather than taking a more evenhanded (and thus presumably less noticeable) approach to what kinds of swag they grab? Why do they support policies that make working conditions worse for teachers?

Down here in the dark bowls of the earth where we “trolls” live, the prevailing explanation is that the union leadership has incentives to do things that fatten themselves at the expense of the union membership. Well, I’m not saying that’s not true! But there’s at least one other plausible theory, and my post offered it. Or both could be right!

This blog is not yet three months old but I am pleased to report that it is off to a good start.  According to Technorati’s rankings, JayPGreene.com is attracting more readers than the American Federation of Teachers’ blog, Edwize, more than Diane Ravitch and Deborah Meier’s, Bridging Differences hosted by Education Week, more than the Reason Foundation’s Out of Control, and the Center for Education Reform’s Edspresso.  It significantly trails the educouple of Eduwonk and Eduwonkette as well as Cato at Liberty (although that’s not primarily an education blog).  Flypaper, which started about the same time as this blog, is also off to a good start.  The Queen of education blogs seems to be Joanne Jacobs.

Here are the Technorati rankings (as of this morning) of education sites that seem to share some of the same audience as this blog.  By no means is this a comprehensive list of education blogs.  And I have no idea how reliable or meaningful Technorati’s rankings really are.  I’d continue blogging no matter what the rankings were because it’s fun.  I imagine the same is true of most others.

My recent posts on the release of our new study on the effects of high-stakes testing in Florida and posts here and here on the appropriateness of releasing it before it has appeared in a scholarly journal, have produced a number of reactions.  Let me briefly note and respond to some of those reactions.

First, Eduwonkette, who started this all, has oddly not responded.  This is strange because I caught her in a glaring contradiction: she asserts that the credibility of the source of information is an important part of assessing the truth of a claim yet her anonymity prevents everyone from assessing her credibility.  I prefer that she resolve this contradiction by agreeing with my earlier defense of her anonymity that the truth of a claim is not dependent on who makes it.  But she has to resolve this one way or another — either she ends her anonymity or she drops the argument that we should assess the source when determining truth.

But apparently she doesn’t have to do anything.  Whose reputation suffers if she refuses to be consistent?  Her anonymity is producing just the sort of irresponsibility that Andy Rotherham warned about in the NY Sun and that I acknowledged even as I defended her.  The only reputation that is getting soiled is that of Education Week for agreeing to host her blog anonymously.  If she doesn’t resolve her double-standard by either revising her argument or dropping her anonymity, Education Week should stop hosting her.  They shouldn’t lend their reputation to someone who will tarnish it.

Mike Petrilli over at Flypaper praises our new study on high stakes testing but takes issue with referencing comments by Chester Finn and Diane Ravitch about how high stakes is narrowing the curriculum in the “pre-release spin.”  I agree with him that this study is not “the last word on the ‘narrowing of the curriculum.’”  But to the extent that it shows that another part of the curriculum (science) benefits when stakes are applied only to math and reading, it alleviates the concerns Checker and Diane have expressed.

As we fully acknowledge in the study, we don’t have evidence on what happens to history, art, or other parts of the curriculum.  And we only have evidence from Florida, so we don’t know if there are different effects in other states.  But the evidence that high stakes in math and reading contribute to learning in science should make us less convinced that all low stakes subjects are harmed.  Perhaps school-wide reforms that flow from high stakes in math and reading produce improvements across the curriculum.  Perhaps improved basic skills in literacy and numeracy have spill-over benefits in history, art, and everything else as students can more effectively read their art texts and analyze data in history.

Andy Rotherham at Eduwonk laments that what I describe as our “caveat emptor market of ideas” doesn’t work very well.  I agree with him that people make plenty of mistakes.  But I also agree with him that “in terms of remedies there is no substitute for smart consumption of information and research…”  There is no Truth Committee that will figure everything out for us.  And any process of reviewing claims before release will make its own errors and will come at some expense of delay.  Think Tank West has added some useful points on this issue.

Sherman Dorn, who rarely has a kind word for me, says: “Jay Greene (one of the Manhattan Institute report’s authors and a key part of the think tank’s stable of writers) replied with probably the best argument against eduwonkette(or any blogger) in favor of using PR firms for unvetted research: as with blogs, publicizing unvetted reports involves a tradeoff between review and publishing speed, a tradeoff that reporters and other readers are aware of.”  He goes on to have a very lengthy discussion of the issue, but I was hypnotized by his rare praise, so I haven’t yet had a chance to take in everything else he said.