Pass the Popcorn: Why the World Needs Bond 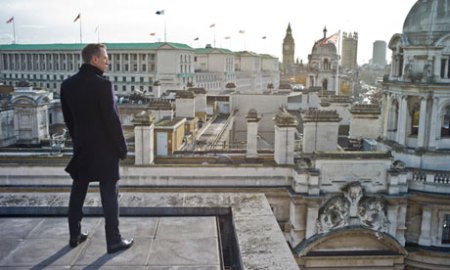 After blogging pretty extensively about James Bond back when Quantum of Solace came out, I was disappointed not to get the chance to see Skyfall in the theaters. When I finally saw it on video, I was devastated not to have seen it in theaters.

I needed a lot of words to say everything I had to say about QOS and James Bond in general back in 2008, and those are still some of my favorite posts. I can say what needs to be said about Skyfall in a lot fewer words. And spoiler free to boot, so if you haven’t seen it, I’ve given you no excuse not to.

This is the first ever deeply profound James Bond movie. I am not being in any way ironic. Several previous entries in the franchise have been deadly serious: From Russia with Love is the cold-hearted bastard of a movie that Casino Royale pretends to be but really isn’t; The Living Daylights has an intricate and deeply satisfying espionage plot (I proclaimed it one of the all-time greatest summer movies). But Skyfall has the soul of a Sophocles. Sam Mendes’s notorious American Beauty has many shortcomings, but in light of Skyfall I think I wasn’t wrong to like it in spite of its faults. Mendes has reached the level of maturity he lacked in 1999.

Skyfall is about why the 21st century needs James Bond. Here’s how I would summarize it:

The two great errors of our age are, on the one hand, to think that it doesn’t matter what kind of people we are (“dreaming of systems so perfect that no one will need to be good” – T.S. Eliot); and, on the other hand, to be so afraid we’ll stop being the right kind of people that we cling to the old and traditional even when it has stopped cultivating us in the right ways. To look both backward and forward – to carry the past into the future, not by preserving it, but by allowing it to form us into the right kind of people and then forming the future accordingly – that is the only hope. 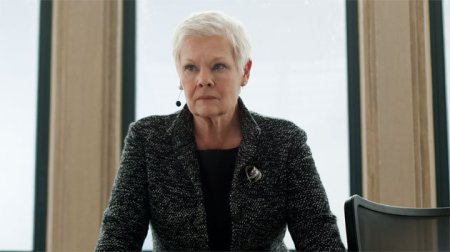 I feel a need to locate this movie alongside The Dark Knight and the Avengers. I wrote before that while The Dark Knight is a movie for all times and places, the Avengers is “the movie for our time.” Skyfall is somewhere in between. On one level it speaks to a universal reality, a problem all civilizations must face: the struggle between the past and the future, between integrity and responsibility. On another level it speaks directly to our own time, because the advance of modern technology has heightened this struggle in unique ways. You could have told a story like this in ancient times – come to think of it, Sophocles did! But you could not have told just this story until today.

Special Bonus: Yesterday a coworker asked for my advice on which Bond film to watch first. I sat down and typed out a complete list of all 23 Bond movies. Hate to see it lost to posterity, so here it is for your amusement:

Casino Royale: Bond for the 21st century. The second best Bond ever made.

Goldfinger: The best ever, by all reckoning. It’s somewhat dated now (the pace of the story is slower, “lasers” are exotic and mysterious, etc.) but if you can look past that, this movie defined the franchise.

SAMPLER PLATTER – THE BEST OF EACH BOND

From Russia with Love: The second best of Sean Connery, after Goldfinger (which he would make next). A Cold War spy movie, more suspense and mystery than explosions and gadgets.

The Man with the Golden Gun: Roger Moore’s second film and his best work. The silliness of the 70s spoiled many of Moore’s movies, but not this one. Bond goes one on one with the world’s greatest assassin.

The Living Daylights: Tim Dalton’s first movie and his best work. They moved away from explosions, girls and gadgets to focus on a complex, highly satisfying espionage plot. Lots of people didn’t like it, but I think it’s fantastic.

GoldenEye: Pierce Brosnan’s first film and his best work. It’s the late 90s and summer blockbusters are starting to get campy, but if you take it in the right spirit, it’s a great time.

Skyfall: Daniel Craig’s second best, it’s actually a very profound movie about why the 21st century needs James Bond. But don’t watch it until you already love the Bond franchise.

SO YOU WANT TO BE A SNOB

Dr. No: This movie has not aged well at all – the pace and storytelling are a mess by our standards. Plus, shameless racism! But a lot of the key Bond elements are present and enjoyable in their embryonic forms.

You Only Live Twice: The formula is getting old, and they have to go further and further over the top to make an impression. Plus, shameless racism! But this movie introduced many of the most iconic Bond moments (e.g. villain’s lair in a volcano)

For Your Eyes Only: Serviceable espionage plot, pulls back from going over the top so it isn’t ruined by silliness.

A View to a Kill: Christopher Walken as a Bond villain. Nothing else to recommend it, but what else do you need?

Tomorrow Never Dies: Much, much better than it has any right to be. Clever dialogue and outstanding performances by very talented stars compensate for a dumb plot.

Quantum of Solace: Too clever by half. What would have been a great follow-up to Casino Royale is spoiled by an attempt to squeeze in other agendas and a really, really weak actor playing the villain.

Diamonds are Forever: Same problems as You Only Live Twice, but without the iconic moments.

Live and Let Die: Introducing a new James Bond (Moore) for the silly 70s! Plus, the franchise’s absolute height of shameless racism!

The Spy Who Loved Me: Same story as Diamonds are Forever.

Octopussy: Yeesh, the silliness. But if you can roll with it, it’s not too bad as a Cold War thriller.

The World Is Not Enough: Same stupidity as Tomorrow Never Dies, but lousy dialogue and worse performances.

Thunderball: At this point the studio has realized that people will go see Bond no matter how crappy the movie is, and made the movie accordingly.

Moonraker: Hey, Star Wars made millions, so now we have to send James Bond into space!

License to Kill: Holy smokes, they made a Bond movie worse than Thunderball!

Die Another Day: Holy smokes, they made a Bond movie worse than License to Kill!

This entry was posted on Wednesday, May 8th, 2013 at 7:52 am and is filed under Pass the Popcorn. You can follow any responses to this entry through the RSS 2.0 feed. You can leave a response, or trackback from your own site.

7 Responses to Pass the Popcorn: Why the World Needs Bond