Overregulation Is All You Need: A Response to Paul Bruno 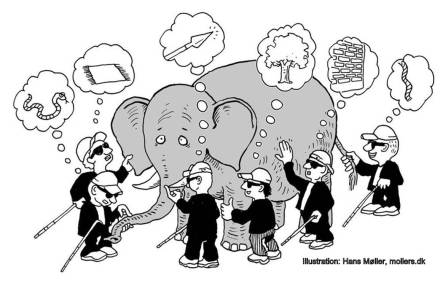 Over at the Brookings Institution’s education blog, Paul Bruno offers a thoughtful critique of  Overregulation Theory (OT), the idea that government regulations on school choice programs can undermine their positive effects. Bruno argues that although OT is “one of the most plausible explanations” of the negative results that two studies of Louisiana’s voucher program recently found, it is not “entirely consistent with the available evidence” and “does not by itself explain substantial negative effects from vouchers.”

I agree with Bruno–and have stated repeatedly–that the studies’ findings do not conclusively prove OT. That said, I believe both that OT is consistent with the available evidence and that it could explain the substantial negative effects (though I think it’s likely there are other factors at play as well). I’ll explain why below, but first, a shameless plug:

On Friday, March 4th at noon, the Cato Institute will be hosting a debate over the impact of regulations on school choice programs featuring Patrick Wolf, Douglas Harris, Michael Petrilli, and yours truly, moderated by Neal McCluskey. If you’re in the D.C. area, please RSVP at this link and join us! Come for the policy discussion, stay for the sponsored lunch!

Is the evidence consistent with Overregulation Theory?

Bruno notes that the differences in enrollment trends between participating and non-participating private schools is consistent with OT. Participating schools had been experiencing declining enrollment in the decade before the voucher program was enacted whereas non-participating schools had slightly increasing enrollment on average. This is consistent with the OT’s prediction that better schools (which were able to maintain their enrollment or grow) would be more likely eschew the vouchers due to the significant regulatory burden, while the lower-performing schools (which were losing students) were more desperate for students and funding, and were therefore more willing to jump through the voucher program’s regulatory hoops. However, Bruno calls this evidence into question:

For one thing, the authors of the Louisiana study specifically check to see if learning outcomes vary significantly between schools experiencing greater or lesser prior enrollment declines, and find that they do not. (Bedrick acknowledges this, but doubts there was enough variation in the enrollment trends of participating schools to identify differences.)

We should be skeptical of the explanatory value of the study’s enrollment check. There is no good reason to assume that the correlation between enrollment growth or decline among the small sample of participating schools (which had significantly negative growth, on average) is the same as among all private schools in the state. Making such an assumption is like a blind man holding onto the truck of an elephant and assuming that he’s holding a snake. 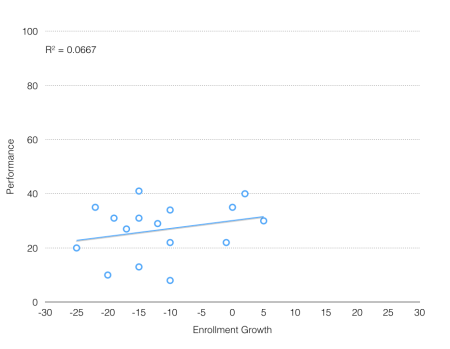 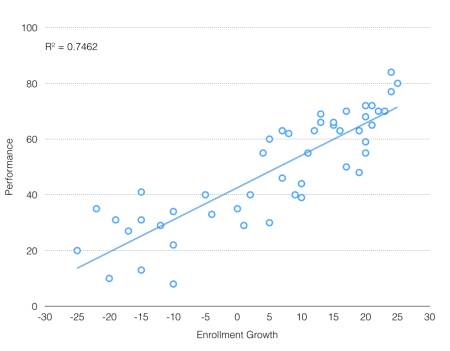 Is there evidence that regulations improve performance?

Bruno also cites evidence that regulations can have a positive impact on student outcomes:

Joshua Cowen of Michigan State University also points out that there is previous evidence of positive effects from accountability rules on voucher program outcomes in other states (though regulations may differ in Louisiana).

The Cowen article considers the impact of high-stakes testing imposed on the Milwaukee voucher program during a multi-year study of that program. The “results indicate substantial growth for voucher students in the first high-stakes testing year, particularly in mathematics, and for students with higher levels of earlier academic achievement.” But is this strong evidence that regulations improve performance? One of the authors of both the original Milwaukee study and the cited article–JPG all-star, Patrick Wolf–cautions against over-interpreting these results:

Ours is one study of what happened in one year for one school choice program that switched from low-stakes testing to high-stakes testing.  As we point out in the report, it is entirely possible that the surge in the test scores of the voucher students was a “one-off” due to a greater focus of the voucher schools on test preparation and test-taking strategies that year.  In other words, by taking the standardized testing seriously in that final year, the schools simply may have produced a truer measure of student’s actual (better) performance all along, not necessarily a signal that they actually learned a lot more in the one year under the new accountability regime.

If we had had another year to examine the trend in scores in our study we might have been able to tease out a possible test-prep bump from an effect of actually higher rates of learning due to accountability.  Our research mandate ended in 2010-11, sadly, and we had to leave it there – a finding that is enticing and suggestive but hardly conclusive.

It’s certainly possible that the high-stakes test improved actual learning. But it’s also possible–and, I would argue, more probable–that changing the stakes just meant that the schools responded to the new incentive by focusing more on test-taking strategies to boost their scores.

For that matter, even if it were true that the regulations actually improved student learning, that does not contradict Overregulation Theory. Both advocates and skeptics of the regulations believe that schools respond to incentives. Those of us who are concerned about the impact of the regulations don’t believe that they can’t improve performance. Rather, our concern is that regulations imposed from above are less effective at improving performance than the incentives created by direct accountability to parents in a robust market in education, and may have adverse unintended consequences.

To explain: We’re concerned that regulations forbidding the use of a school’s preferred admissions standards or requiring the state test (which is aligned to the state curriculum) might drive away better-performing schools, leaving parents to choose only among the lower-performing schools. We’re concerned that price controls will inhibit growth, providing schools with an incentive only to fill empty seats rather than to scale up. We’re concerned that mandatory state tests will inhibit innovation and induce conformity. None of these concerns rule out the possibility (or, indeed, the likelihood) that over time, requiring private schools to administer the state test and report the results and/or face sanctions based on test performance will improve the participating schools’ performance on that test.

Again: we agree that schools respond to incentives. We just think the results of top-down incentives are likely to be inferior to the results of bottom-up choice and competition, which have proved to be powerful tools in so many other fields for spurring innovation and improving quality.

Can Overregulation Theory alone explain the negative results in Louisiana?

[E]ven if regulation prevented all but the worst private schools from participating, this would explain why students did not benefit from transferring into them, but not why students would transfer into them in the first place.

So Overregulation Theory might be part of the story in explaining negative voucher effects in Louisiana, but it is not by itself sufficient. To explain the results we see in the study, it is necessary to tell an additional story about why families would sort into these apparently inferior schools.

Bruno offers a few possible stories–that parents select schools “that provide unobserved benefits,” that the voucher program “induced families to select inferior schools,” or that parents merely “assume any private school must be superior to their available public schools”–but any of these can be consistent with OT.  Indeed, the second story Bruno offers is practically an extension of OT: if the voucher regulations truncate supply so that it is dominated by low-quality schools, and the government gives false assurances that they have vetted those schools, then it is likely that we will see parents lured into choosing inferior schools.

I will conclude as I began: expressing agreement. I concur with Bruno’s assessment that “it is likely that the existing evidence will not allow us to fully adjudicate between competing hypotheses.” Indeed, it’s likely that future evidence won’t be conclusive either (it rarely is), but I hope that further research will shed more light on this important question. Bruno concludes by calling for greater efforts to “understand how families determine where their children will be educated,” noting that by understanding how and why parents might make “sub-optimal — or even harmful” decisions will help “maximize the benefits of school choice while mitigating its risks.” These are noble goals and I share Bruno’s desire to pursue them. I just hope that policymakers will approach what we learn with a spirit of humility about what they can accomplish.