Reason hosted a debate between Stiglitz and Easterly on the role of markets in reducing poverty. A questioner from the audience asks Professor Stiglitz to address his endorsement of Hugo Chavez in 2006 and 2007 in a respectful but direct fashion around minute 51. Eventually after a fumbling attempt to claim that some aspects of the Chavez program were good, Stiglitz admits that in the end while Chavez rhetorically embraced higher and more inclusive rates of economic growth, in the end “he didn’t know how to do it.”

Venezuela sits atop the world’s largest proven oil reserves but production is in free-fall along with the overall economy. Starvation and hyper-inflation run rampant, and the country’s economy dives ever deeper into a humanitarian crisis. Meanwhile, a group of Texas wildcatters have a single region outproducing the country with the largest proven reserves despite the fact that we’ve been drilling in that region for a century. Friedman once said that if you put the federal government in charge of the Sahara they would produce a shortage of sand. This was not alas much of an exaggeration.

The Nation’s Report Card (aka the National Assessment of Educational Progress or NAEP) released new student achievement data in April for Math and Reading exams given in 2017. Nationwide, the news was not good, and the same was generally true for scores in Texas. Figure 1 shows NAEP math and reading gains for 8th grade students since 2009 for states.

Texas 8th graders were scoring three points higher on math than 8th graders in 2009, but five points lower in reading. On these tests, 10 points is approximately equal to a grade level worth of average academic progress. Overall, Texas students failed to show much academic improvement during this period.

The improvement in scores among Texas charter school students greatly exceed those of any state. Gains however are not the only consideration. Some states like Massachusetts failed to show large academic gains but had high scores in both 2009 and 2017. International comparisons show Massachusetts compares favorably to the top European and Asian school systems, so there is no shame in holding your mud with high scores. The next chart therefore plots 8th grade math gains (from 2009 to 2017) with overall scores (in 2017) for states and Texas charter students to take both improvement over time and overall level of achievement into account:

Texas charter students not only had higher gains than any state, they also demonstrated higher overall scores than most states. Each NAEP exam utilizes a new random sample of students, and the “sampling error” for subgroups exceeds that for states. Such sampling error however should be randomly distributed, meaning that Texas charter scores/gains could be either larger or smaller. The Reading exam however provides an entirely separate sample of students from the math exam, presented in Figure 4 below:

Texas charter students again show both larger gains than any state, and relatively impressive scores, especially when considering student demographics-leading us to our next subject.

Scores and gains this impressive naturally lead to the question of whether changes in student composition drive them. Only a random assignment study can definitively isolate the role of school quality in driving scores and gains, and such studies are impractical for statewide assessments. A Stanford University study utilizing state academic data from 2011 to 2015 using a student matching strategy found evidence of stronger academic growth for Hispanic students attending Texas charters after controlling for a variety of factors.

The demographic distribution of Texas charter schools stood at more than 85% minority in 2016-17 after having become increasingly majority-minority over the previous decade. Hispanics constituted 60 percent of Texas charter students in 2016-17. A comparison of Hispanic 8th grade math scores that accounted for both parental education and special program status (English Language Learners and Special Education) found that Hispanic students attending Texas charter schools outscored all statewide averages for Hispanic students.

This would have to be the case in order to make this happen:

NAEP can’t isolate the role of average school quality in these impressive scores. When however an 85% minority school sector out scores Vermont I’m cautiously optimistic that school quality had something to do with it.  Texas adds ~90,000 new K-12 students per year and the districts seem to be struggling both academically and financially in keeping up with the growth. Expanded opportunities for families to choose the sort of education to suit their needs and aspirations could help address both concerns.

So usually every other week or so there is a new story about how Texas has once again drop kicked California in one way or another. It would start to get boring if it weren’t just so delightful for some of us, complete with great info-graphics like:

Oh and this one:

And of course the editorial cartoonists have joined in the fun: 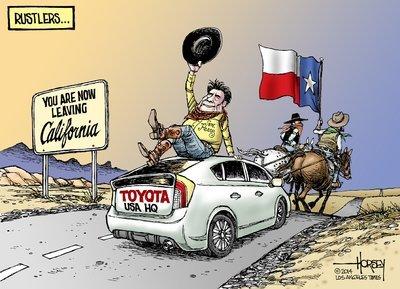 But at long last, the SURFER STRIKES BACK in the news today from the Dallas Morning News that Texas SAT scores have hit a 22 year low. Worse still, California, long a smear on the bottom of the Texas boot, has comparable student demographics and participation rates but better scores!

So cheer up gnarly surfer dude! Texas may have a top business climate, population and economic growth, etc. but they have in recent years displayed a complacency regarding K-12 reform that has allowed even California to overtake them.

Don’t Worry California, Texans will Eventually Figure out How to Get Your Oil

So the bad news for California just keeps rolling in-turns out that the technology is not just there yet to get to more than a fraction of California’s 13.7 billion barrels of tight oil.   Not to worry Keanu, Texas wildcatters are getting better at the drilling techniques all the time.  Meanwhile in Texas, Mark J. Perry notes that in human history there have been 10 oil fields that have produced a million barrels of oil per day, and two of them are operating in Texas right now, largely thanks to the 18 years of visionary effort from the great George P. Mitchell.