The Nation’s Report Card (aka the National Assessment of Educational Progress or NAEP) released new student achievement data in April for Math and Reading exams given in 2017. Nationwide, the news was not good, and the same was generally true for scores in Texas. Figure 1 shows NAEP math and reading gains for 8th grade students since 2009 for states.

Texas 8th graders were scoring three points higher on math than 8th graders in 2009, but five points lower in reading. On these tests, 10 points is approximately equal to a grade level worth of average academic progress. Overall, Texas students failed to show much academic improvement during this period.

The improvement in scores among Texas charter school students greatly exceed those of any state. Gains however are not the only consideration. Some states like Massachusetts failed to show large academic gains but had high scores in both 2009 and 2017. International comparisons show Massachusetts compares favorably to the top European and Asian school systems, so there is no shame in holding your mud with high scores. The next chart therefore plots 8th grade math gains (from 2009 to 2017) with overall scores (in 2017) for states and Texas charter students to take both improvement over time and overall level of achievement into account:

Texas charter students not only had higher gains than any state, they also demonstrated higher overall scores than most states. Each NAEP exam utilizes a new random sample of students, and the “sampling error” for subgroups exceeds that for states. Such sampling error however should be randomly distributed, meaning that Texas charter scores/gains could be either larger or smaller. The Reading exam however provides an entirely separate sample of students from the math exam, presented in Figure 4 below: 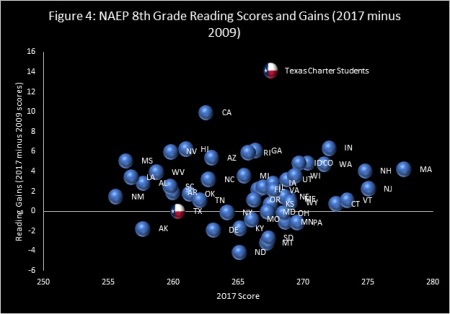 Texas charter students again show both larger gains than any state, and relatively impressive scores, especially when considering student demographics-leading us to our next subject.

Scores and gains this impressive naturally lead to the question of whether changes in student composition drive them. Only a random assignment study can definitively isolate the role of school quality in driving scores and gains, and such studies are impractical for statewide assessments. A Stanford University study utilizing state academic data from 2011 to 2015 using a student matching strategy found evidence of stronger academic growth for Hispanic students attending Texas charters after controlling for a variety of factors.

The demographic distribution of Texas charter schools stood at more than 85% minority in 2016-17 after having become increasingly majority-minority over the previous decade. Hispanics constituted 60 percent of Texas charter students in 2016-17. A comparison of Hispanic 8th grade math scores that accounted for both parental education and special program status (English Language Learners and Special Education) found that Hispanic students attending Texas charter schools outscored all statewide averages for Hispanic students.

This would have to be the case in order to make this happen:

NAEP can’t isolate the role of average school quality in these impressive scores. When however an 85% minority school sector out scores Vermont I’m cautiously optimistic that school quality had something to do with it.  Texas adds ~90,000 new K-12 students per year and the districts seem to be struggling both academically and financially in keeping up with the growth. Expanded opportunities for families to choose the sort of education to suit their needs and aspirations could help address both concerns.

This entry was posted on Monday, June 4th, 2018 at 6:50 am and is filed under charter schools, NAEP, Tejas Uber Alles. You can follow any responses to this entry through the RSS 2.0 feed. You can leave a response, or trackback from your own site.