Real Accountability Is Choice, Not Regulation 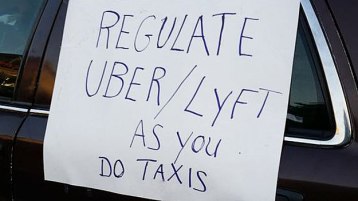 Imagine that a lobbyist from the taxi industry argued that rideshare companies like Uber and Lyft are “unaccountable” because they aren’t subject to the same regulations as the taxi industry.

The right response, of course, would be to laugh at the absurdity. Clearly Uber and Lyft drivers are much more accountable than taxi drivers because they are directly accountable to the consumer. Passengers rate their drivers based on the quality of their experience, so drivers tend to work hard to ensure that passengers have a good experience. When was the last time you got into a taxi and were offered candy or your choice of music?

Now imagine that someone responded to the taxi lobbyist with something like the following:

That may have been the case years ago, when Uber first burst onto the scene. Rideshare companies were not generally subject to price controls — not even to prohibit “surge pricing” —and even if they were, there were no requirements to purchase a taxi medallion or obtain a commercial license. And, to be fair, that’s still the case for some rideshare companies, where commercial insurance requirements remain light to nonexistent.

But what some rideshare-doubters might not know is that some of the newest and biggest rideshare markets—like those in New York and Maryland—now have significant accountability provisions that are arguably even stronger than those found in many taxi laws. That’s no accident. Pro-rideshare lawmakers adopted these taxi-like requirements because some of us accountability hawks and advocacy groups pushed for them.

In Austin, Texas, participating rideshare companies must run fingerprint background checks on all their drivers. In New York City, drivers must obtain a Taxi and Limousine Commission permit and license plate that’s used to show that the driver meets the city’s standards. Mayor Bill De Blasio has also pushed for imposing a medallion-like system that would keep the growth in the number of rideshare drivers down to manageable levels.

So if you oppose Uber and Lyft because of lack of accountability, it may be time to change your position.

Sadly, that’s almost exactly what Fordham’s Mike Petrilli wrote this week in attempting to defend choice programs from the spurious charge that they are “unaccountable.” The above paragraphs are merely a revised version of what he actually wrote (as Matt highlighted earlier this week). Rather than explain that the very act of choosing is, itself, a strong form of accountability, Mike instead lists all the ways in which some voucher programs subject schools to top-down government regulations–“just like their public school counterparts.”

This fundamentally misunderstands accountability. As I explained at the Heritage Foundation earlier this week, true accountability is when service providers are directly answerable to the people most affected by their performance. When that isn’t possible, as when a utility company has a monopoly, top-down regulations may be necessary instead. But we shouldn’t confuse the inferior alternative accountability regime for the ideal form of accountability just because that’s what we’re used to. As Thomas Sowell has written, “It is hard to imagine a more stupid or more dangerous way of making decisions than by putting those decisions in the hands of people who pay no price for being wrong.”

UPDATE: For my comments at Heritage this week, plus even wiser commentary from Jay Greene and Yuval Levin, see here:

This entry was posted on Friday, January 27th, 2017 at 10:39 am and is filed under Uncategorized. You can follow any responses to this entry through the RSS 2.0 feed. You can leave a response, or trackback from your own site.

12 Responses to Real Accountability Is Choice, Not Regulation