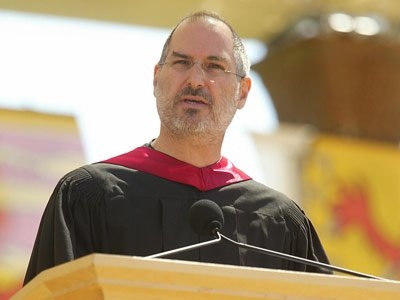 Everyone is talking about Steve Jobs this morning.  The acknowledgement of how he improved the human condition while also making billions in profits for himself and others almost makes the Al Copeland Humanitarian Award unnecessary this year.  Steve Jobs embodied the entrepreneur as humanitarian — not because he gave away his wealth as if to cleanse himself of the sin of having earned it, but because he created and promoted consumer items that significantly improved our lives while justly generating enormous wealth for himself, his employees, and shareholders.

In addition to embodying the spirit of “The Al,” Jobs had quite a lot of smart things to say about education reform.  I’m grateful to Whitney Tilson for reminding me of this.  Here are some selected remarks from Steve Jobs on education:

I’m a very big believer in equal opportunity as opposed to equal outcome. I don’t believe in equal outcome because unfortunately life’s not like that. It would be a pretty boring place if it was. But I really believe in equal opportunity. Equal opportunity to me more than anything means a great education. Maybe even more important than a great family life, but I don’t know how to do that. Nobody knows how to do that. But it pains me because we do know how to provide a great education. We really do. We could make sure that every young child in this country got a great education. We fallfar short of that…. The problem there of course is the unions. The unions are the worst thing that ever happened to education because it’s not a meritocracy. It turns into a bureaucracy, which is exactly what has happened. The teachers can’t teach and administrators run the place and nobody can be fired. It’s terrible.

But in schools people don’t feel that they’re spending their own money. They feel like it’s free, right? No one does any comparison shopping. A matter of fact if you want to put your kid in a private school, you can’t take the forty-four hundred dollars a year out of the public school and use it, you have to come up with five or six thousand of your own money. I believe very strongly that if the country gave each parent a voucher for forty-four hundred dollars that they could only spend at any accredited school several things would happen. Number one schools would start marketing themselves like crazy to get students. Secondly, I think you’d see a lot of new schools starting. I’ve suggested as an example, if you go to Stanford Business School, they have a public policy track; they could start a school administrator track. You could get a bunch of people coming out of college tying up with someone out of the business school, they could be starting their own school. You could have twenty-five year old students out of college, very idealistic, full of energy instead of starting a Silicon Valley company, they’d start a school. I believe that they would do far better than any of our public schools would. The third thing you’d see is I believe, is the quality of schools again, just in a competitive marketplace, start to rise. Some of the schools would go broke. Alot of the public schools would go broke. There’s no question about it. It would be rather painful for the first several years

DM: But deservedly so.

SJ: But far less painful I think than the kids going through the system as it is right now.

The market competition model seems to indicate that where there is a need there is a lot of providers willing to tailor their products to fit that need and a lot of competition which forces them to get better and better. I used to think when I was in my twenties that technology was the solution to most of the world’s problems, but unfortunately it just ain’t so… We need to attack these things at the root, which is people and how much freedom we give people, the competition that will attract the best people. Unfortunately, there are side effects, like pushing out a lot of 46 year old teachers who lost their spirit fifteen years ago and shouldn’t be teaching anymore. I feel very strongly about this. I wish it was as simple as giving it over to the computer….

As you’ve pointed out I’ve helped with more computers in more schools than anybody else in the world and I absolutely convinced that is by no means the most important thing. The most important thing is a person. A person who incites your curiosity and feeds your curiosity; and machines cannot do that in the same way that people can. The elements of discovery are all around you. You don’t need a computer. Here – why does that fall? You know why? Nobody in the entire world knows why that falls. We can describe it pretty accurately but no one knows why. I don’t need a computer to get a kid interested in that, to spend a week playing with gravity and trying to understand that and come up with reasons why.

DM: But you do need a person.

SJ: You need a person. Especially with computers the way they are now. Computers are very reactive but they’re not proactive; they are not agents, if you will. They are very reactive. What children need is something more proactive. They need a guide. They don’t need an assistant. I think we have all the material in the world to solve this problem; it’s just being deployed in other places. I’ve been a very strong believer in that what we need to do in education is to go to the full voucher system. I know this isn’t what the interview was supposed to be about but it is what I care about a great deal.

The above interview was from 1995, but it is clear that Jobs did not significantly change his mind over time.  In 2007 he reiterated that unions and lifetime employment for teachers were at the heart of the problem.  This is from PC World:

During a joint appearance with Michael Dell that was sponsored by the Texas Public Education Reform Foundation, Jobs took on the unions by first comparing schools to small businesses, and school principals to CEOs. He then asked rhetorically: “What kind of person could you get to run a small business if you told them that when they came in, they couldn’t get rid of people that they thought weren’t any good? Not really great ones, because if you’re really smart, you go, ‘I can’t win.’ ”

He went on to say that “what is wrong with our schools in this nation is that they have become unionized in the worst possible way. This unionization and lifetime employment of K-12 teachers is off-the-charts crazy.”

After Steve Jobs made these comments I wrote an op-ed for the NY Sun, which stated:

There is a price to be paid for this kind of frank analysis and Steve Jobs knows it. “Apple just lost some business in this state, I’m sure,” Mr. Jobs said. Of course, Apple sells a large portion of its computers to public school systems. By taking a stance against school unionization, Mr. Jobs may lose some school sales for Apple.

Sharing the stage with Mr. Jobs was Michael Dell, the chief executive officer of Dell, a competing computer manufacturer. By comparison, according to the description of the event, Mr. Dell “sat quietly with his hands folded in his lap,” during Mr. Jobs’ speech while the audience at an education reform conference “applauded enthusiastically.”

Mr. Dell followed Mr. Jobs by defending the rise of unions in education: “the employer was treating his employees unfairly and that was not good. … So now you have these enterprises where they take good care of their people. The employees won, they do really well and succeed.”

Whether Mr. Jobs or Mr. Dell is right about the role unions have played in public education, one thing is perfectly clear – attacking the unions is a controversial and potentially costly choice for corporate CEOs.

The safe thing is to make bland declarations about the need to improve the quality of education without getting into any of the messy particulars that might be necessary to produce a better education. Changing the status quo in education almost certainly requires ruffling someone’s feathers, but doing that is almost certainly bad for business.

In part this is why we see highly successful entrepreneurs who survive in a world of ruthless competition abandon these business principles when they turn to education philanthropy. People who would never endorse the idea that businesses should be granted local monopolies, offer workers lifetime tenure, or pay employees based solely on seniority, embrace a status quo public system that has all of these features.

While some CEOs may sincerely believe that education is somehow different from the rest of the world in which they live, others have been cowed into submission. Teachers are a very large, well-organized, and relatively affluent consumer and political bloc….

Steve Jobs has embarked on a perilous path, but with solid evidence and persuasive arguments, he can move all of us toward higher quality schools. He should be applauded for having the courage to say out loud what scores of other business leaders are too sheepish to say.

Unfortunately, Steve Jobs will no longer be with us as we try to advance on this perilous path of education reform.

This entry was posted on Thursday, October 6th, 2011 at 7:59 am and is filed under Al Copeland Humanitarian Award, teacher union, vouchers. You can follow any responses to this entry through the RSS 2.0 feed. You can leave a response, or trackback from your own site.

10 Responses to Steve Jobs on Education