Why Do Miami Kids Read a Grade Level Better than Oregon Kids?

The NAEP released the 2009 Urban District NAEP results recently, which of course was an invitation to go exploring the data. I thought it would be interesting to look at the results for 4th grade reading. 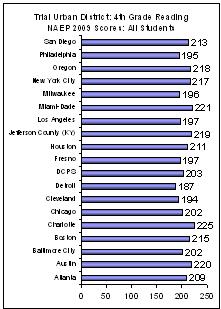 Perhaps a bit of control for demographic differences between these jurisdictions is in order. After all, some districts like Austin (and I suspect Charlotte) have quite a few affluent kids attending them. So in the next chart, I only look at free and reduced lunch eligible children in the districts for more of an apples to apples comparison.

Oregon low-income kids perform **ahem** like a mid-tier urban district despite the inclusion of suburban kids, and approximately a grade level behind both Miami and NYC.  Some might also find it interesting that the Miami school district is 91% minority, while Oregon is 72% Anglo.

I certainly do. Quite a bit actually.

When I read Bernard Lewis’ book What Went Wrong? about how the Islamic world went from being the premier civilization to an economic backwater, it seemed to me that Lewis had asked the wrong question. Most of the world, after all, is a backwater. The real question is What Went Right? with the West more than what went wrong in the Islamic world.

It behooves us to ask both questions in this case: what in the world is wrong with Oregon, and what is going right in Miami? I have a very good idea of what is going right in Miami. Good standards and testing, transparency, letter grade rankings for schools, parental choice, alternative certification, curtailment of social promotion. I don’t know what Oregon has been doing, but it looks to me like they should make some rather dramatic changes.

This entry was posted on Wednesday, June 2nd, 2010 at 10:04 pm and is filed under competitive effects, instructional reform. You can follow any responses to this entry through the RSS 2.0 feed. You can leave a response, or trackback from your own site.