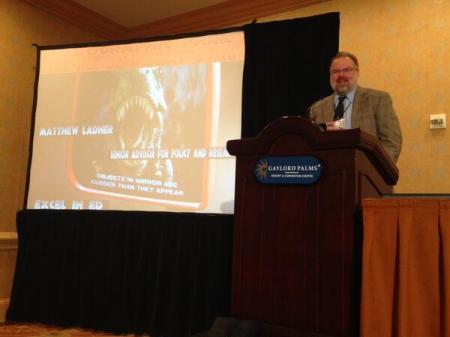 Yesterday I had the opportunity to present at the American Federation for Children conference in Orlando along with Pat “PDiddy” Wolf, Lance Izumi, refereed by our main man Ed Kirby.  Lance busted out depressing “Not as Good as You Think” evidence on suburban public schools  in California and Illinois.  PDiddy used Bud and Sissy from one of the greatest really bad movies of all time to tell us that school choice research is looking for love in all the wrong places, and even included the great Scott Glenn:

I batted clean up with a talk on age demographics. Someone told me that you can save a power point as jpg files, so I gave it a try. Here is the first slide: 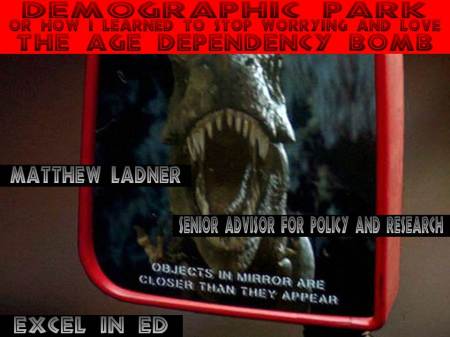 Here is the most relevant middle slide, showing that a number of states are set to get hit with a double challenge of large increases of young and old people by the year 2030 according to Census Bureau estimates, causing all kinds of health care, pension and education challenges:

So some of you are wondering what your state looks like. Let me just tell you- it is bad. Stay tuned for a Friedman Foundation with the gory details by state. Oh by the way, the people who will be in their prime earning years in 2030 are in the public school system right now, and only a minority of them are being educated to a high level. Ergo the conclusion:

In short, everything we’ve done up to this point needs to have been baby steps towards what comes next.  What comes next needs to be a far deeper and more powerful policy interventions than incremental policies like our current charter and voucher programs. In an earlier panel, Derrell Bradford related that we used to buy our music at Tower Records, used to buy whole albums in order to get a single song, but that Napster and then iTunes had changed all of that for the better. Gisele Huff then made the point that too much of what we are doing in the school choice movement is dedicated to setting up new record stores.

Or perhaps in getting public funds to add a new wing on to the existing Tower Records.

I don’t want to pick on my friends in Indiana too much, as this idea of using public funds to add existing space onto participating private choice programs would doubtlessly have a higher ROI than much public K-12 spending in Indiana and would provide a better opportunity for thousands of disadvantaged children.  Having said that, it strikes me as a troubling idea. In my opinion the focus should clearly be on how to get many of the 2/3 of Indiana private schools who do not participate in the voucher program to change their minds (**cough**less regulation **cough**).

Next, let’s get the scholarship amount up to something decent, let the colleges and universities into the K-12 space, have blended learning make the jump into private schooling, see if you can get a private tutoring sector to flourish (it worked out really well for Alexander the Great and many of the founder fathers btw) etc.  In other words, let’s give parents control of the money and an incentive to consider opportunity costs and see what they come up with.  This could resolve a number of vexing questions.  For instance, how should technology be used to improve learning? I’m not sure, and if you are sure then you may need to work on humility. Perhaps we should let the parents figure that out through a system of voluntary exchange, let them change, customize and improve it over time.  How much should a digital course cost? I have no idea but we have these demand and supply curves that have a really strong track record in figuring questions like that out.

Right now we have an incrementally expanding charter school sector and few private choice programs capable of spurring new private school creation. Even if we improve our choice programs to spur new private school creation, it will essentially resemble a second charter school program incrementally adding new space year by year. This is both highly desirable and nowhere close to where we urgently need to go.

We need to be in this for the kids and the parents, not for a tiny preexisting stock of private schools. Don’t get me wrong private schools- I do deeply love you– but choice funding is the entitlement of the child not of any system of schools.  Private schools need to be a bigger part of the solution, but we should never mistake them for the entire solution.

“We’ve squeezed everything we can out of a system that was designed a century ago,” Marc Tucker, vice chairman of the New Commission on the Skills of the American Workforce told the Christian Science Monitor in 2006. “We’ve not only put in lots more money and not gotten significantly better results, we’ve also tried every program we can think of and not gotten significantly better results at scale. This is the sign of a system that has reached its limits.”  Personally I can think of some ways to squeeze more out of the current system, but their political sustainability will always have limits and Tucker is basically right in his assessment. “I think we’ve tried to do what we can to improve American schools within the current context,” Jack Jennings told the CSM. “Now we need to think much more daringly.”

Time to change the “current context”

Here is my version of daring- let’s give parents complete control over our K-12 funding within a system of financial oversight and academic transparency and incentives to economize and sit back and marvel as they figure out solutions of how to make the best use of limited resources.  We are going to have far fewer resources to provide in the future due to the looming battle between health care and education spending. We must go faster towards increased return on investment and customization. The Economist magazine said it better than I can after it reviewed the evidence on choice and concluded:

In rich countries, this generation of adults is not doing well by its children. They will have to pay off huge public-sector debts. They will be expected to foot colossal bills for their parents’ pension and health costs. They will compete for jobs with people from emerging countries, many of whom have better education systems despite their lower incomes. The least this generation can do for its children is to try its best to improve its state schools. Giving them more independence can do that at no extra cost. Let there be more of it.

Lots and lots more as fast as possible.