Schooling is Starting to Catch Up to Coons and Sugarman (finally) 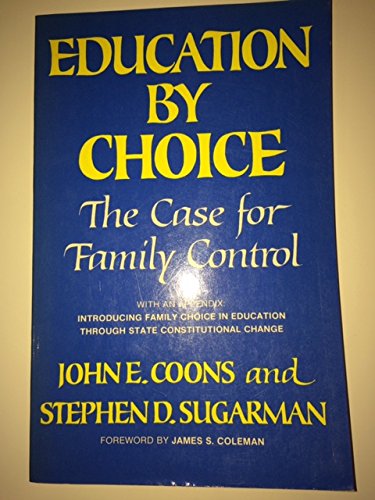 Over at RedefinED Jack Coons reflects on the 40th anniversary of the publication of the book Education by Choice with his coauthor Stephen Sugarman.  Dr. Coons in some ways too modest, saying that he and his co-author “did not anticipate” Education Savings Accounts, but in effect I believe that they did. Coons and Sugarman envisioned parents, including low-income parents, having the power to create “personally tailored education” for their children, using “divisible educational experiences.” This sounds very close to education savings accounts/multi-provider education to my ears:

To us, a more attractive idea is matching up a child and a series of individual instructors who operate independently from one another. Studying reading in the morning at Ms. Kay’s house, spending two afternoons a week learning a foreign language in Mr. Buxbaum’s electronic laboratory, and going on nature walks and playing tennis the other afternoons under the direction of Mr. Phillips could be a rich package for a ten-year-old. Aside from the educational broker or clearing house which, for a small fee (payable out of the grant to the family), would link these teachers and children, Kay, Buxbaum, and Phillips need have no organizational ties with one another. Nor would all children studying with Kay need to spend time with Buxbaum and Phillips; instead some would do math with Mr. Feller or animal care with Mr. Vetter.

Coons and Sugarman were talking about education, not just schools, in a way that is today becoming increasingly practiced. They wanted parents in the driver’s seat. In “Education by Choice,” they suggest “living-room schools,” “minischools” and “schools without buildings at all.” They describe “educational parks” where small providers could congregate and “have the advantage of some economies of scale without the disadvantages of organizational hierarchy.” They even float the idea of a “mobile school.” Their prescience is remarkable, given that these are among the models ESA supporters envision today.

Multi-vendor education has been growing in different forms for decades-with families enrolling in after-school/summer programs of various sorts on one end of the spectrum to full blown homeschooling with multiple service providers on the other. Coons and Sugarman were way ahead of their time, and this is just getting started.

This entry was posted on Thursday, September 6th, 2018 at 7:08 am and is filed under Education Savings Accounts. You can follow any responses to this entry through the RSS 2.0 feed. You can leave a response, or trackback from your own site.