Another Myth Bites the Dust

The Arizona Charter School Association analyzed public school migration patterns for 85,000 kids who switched among public schools by their prior AZMerit scores. And well this is what it looks like: 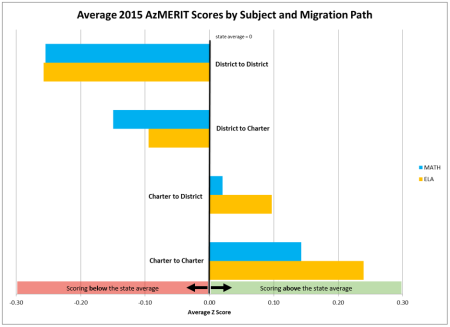 So kids transferring from Arizona districts to Arizona charters have below average AZMerit scores. Those transferring from charters to districts have above average AZMerit scores. This is to put things mildly not consistent with the litany against charters that claims that Arizona charters are engaging in massive creaming of students. If anything, this data suggests the opposite: that if there is creaming occurring, it seems to be in the direction of districts creaming charters.

Mind you the creaming thesis already had huge problems, the first of which being math. When you see scores improving in both district and charter schools, it makes it very difficult indeed to argue that charters have circumvented lottery requirements (which districts don’t have) to only get the high flying academic kids. If this were the case it would have been a really neat trick to see Arizona districts showing better gains than the national average despite some of the nation’s largest Great Recession funding cuts, despite a continuing trend into deeper majority-minority states and despite losing tens of thousands of their top performing students.

The average transfer from district to charter having below average scores in fact might in part explain the district gains we see, but then you get back to those charter gains…looks like they are having a lot of success getting kids who were off track back on it.

This entry was posted on Friday, August 17th, 2018 at 10:43 am and is filed under charter schools. You can follow any responses to this entry through the RSS 2.0 feed. You can leave a response, or trackback from your own site.

3 Responses to Another Myth Bites the Dust