The Rise of Indiana Open Enrollment 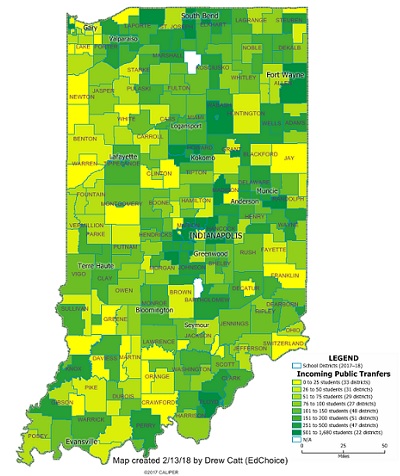 So let’s contrast this with the Fordham Ohio open enrollment map:

Much larger numbers in these Arizona districts, but also a broader definition of open-enrollment being utilized for the Arizona data that includes students transferring within district boundaries. Nevertheless, we know from a separate source that Scottsdale Unified has 4,000 students from outside of district boundaries, which is more than twice the number of any of the Indiana districts in the Ed Choice map.

So here is my provisional take, subject to your challenge in the comments: Indiana’s combined choice programs have coaxed the state out of the Ohio-like geographic segregation. Private choice program design may have contributed to this- Ohio’s voucher programs focus almost exclusively on urban students, while Indiana’s are more inclusive. Indiana has had the nation’s fastest growing voucher program in recent years. Although means-tested, Indiana’s private choice programs create empty seats in suburban districts more than is the case in the Ohio programs, which reach only suburban special education students.

The open enrollment boulder has been rolling down hill for a longer period of time in Arizona. Open-enrollment students outnumber charter students 2-1, and charter students outnumber private choice participants by 3-1. In other words, in Arizona school choice is being done primarily by school districts themselves. This of course did not happen exclusively through a process of spontaneous enlightenment whereby Arizona school districts threw down the drawbridge over the moat to welcome in thousands of out of district transfers out of the goodness of their hearts. Rather it was the product of incentives- hundreds of charter schools opening in suburbs and towns and a couple of decades of geographically inclusive private choice programs.

Charters and private choice do not deserve all the credit, as some suburban districts relatively unaffected nevertheless chose to participate in open enrollment. Chandler Unified for instance watched their enrollment grow by a third despite a large increase in charter schools and has been rocking academic growth to boot. I’m told that there is not a non-district charter in the Vail Unified district south of Tucson, but there are a many students from Tucson Unified. I doubt they are sweating choice much, but they have nevertheless chosen to participate, and Arizona’s students are the richer for it. Nevertheless, it seems self-evident that a main reason that Scottsdale Unified took in 4,000 students is due to the 9,000 students that live in the district boundaries and do not attend school in the district.

The defection of early open-enrollment adopters increases the pressure on other districts to participate, creating a virtuous cycle. I’m thrilled to see evidence of this in Indiana. The School Choice 1.0 failed urban students insomuch as it failed to unlock the suburbs. It’s time for the movement to embrace an inclusive “Social Justice Plus” strategy that aims to give urban students access to private, charter and suburban schools.

This entry was posted on Monday, February 26th, 2018 at 7:05 am and is filed under charter schools, Education Savings Accounts, school choice, vouchers. You can follow any responses to this entry through the RSS 2.0 feed. You can leave a response, or trackback from your own site.

One Response to The Rise of Indiana Open Enrollment