Megan McArdle wrote a lament for school vouchers at Bloomberg. I’ll briefly lay out why I think a stronger case for optimism is warranted before trying to beat back insomnia with a youtube documentary of ancient Egyptian engineering (I wish I was making that up).

The first problem involves an over-reliance on studies of short-term test score trends. Our ability to study student test scores within the confines of a random assignment study usually lasts about three years.  During the early part of those three years students are dealing with negative transfer effects in the early going.

So if we take the available evidence from Milwaukee, within the random assignment window the evidence looks to me like this: the normal trajectory for a low-income urban child is to fall further behind over time. The control group of voucher users does not follow suit.  By the time the random assignment study falls apart some of the differences in test scores are statistically significant and in favor of the voucher students.

Is this a failure? It depends largely upon your expectations. If you had expected Milwaukee vouchers to heal the world’s pain, this is indeed disappointing. If you however gather some longer term evidence, find that the voucher kids have meaningful long-term attainment benefits and realized these benefits at a much smaller cost per pupil than the public system, you take a different view. I see Milwaukee vouchers as a success in an evolutionary process and want to find ways to make it more successful.

Milwaukee type programs suffer from design limitations and have hit a ceiling politically. They were basically designed to give families the option to move children into a preexisting set of private schools with empty seats. That’s a wonderful thing for many families, until you run out of empty seats. This doesn’t make these programs bad, just limited. Compared to the district that spends twice as much, has lower test scores and lower graduation rates, it is a bit of a triumph at least until your supply of empty seats runs out.  If we want more than that (and we should) we need more robust programs.

By “more robust” I mean programs with more equitable funding levels, enough to spur the creation of new schools. Programs that allow parents options outside of just private school tuition into a wider array of colleges, tutors, and service providers. Programs open to all children and communities that address with equity issues through funding weights rather than self-defeating exclusion.

Parental choice 2.0 (ESA) programs emerged from the unconstitutional ashes of an Arizona voucher program for children with disabilities just six years ago. Governor Napolitano signed a voucher bill for students with disabilities in 2004, but the Arizona Supreme Court ruled it unconstitutional. Lawmakers subsequently replaced it first with a scholarship tax credit law, and then the first ESA program. How is that whole crazy freedom and opportunity and ability to vote with your feet thing working out for AZ students with disabilities? Thanks for asking: 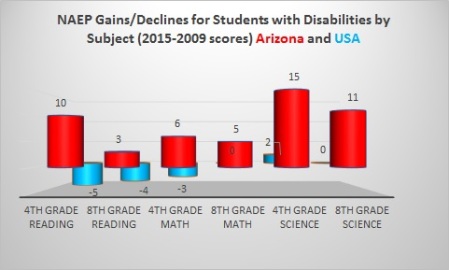 The ESA concept remains a work in progress with young programs operating in AZ, FL, MS, NC and TN. For a number of reasons, I believe that this model has a much higher academic and political ceiling than version 1.0, but caution is warranted. Part of the reason we see articles like McArdle’s is because we promised that the tears of vouchers would cure cancer like tomorrow.  School vouchers were a vitally necessary step in a process of unpredictable pacing, but they were more like your father’s Oldsmobile vis-a-vis your great grandfather’s Model T. We all want our flying car and we want it now and I can only tell you we are working on it, and the status-quo is both undesirable and unsustainable. The tears of ESAs won’t cure cancer tomorrow either, but the best is yet to come in the evolution of putting families in charge of the education of their children.

This entry was posted on Tuesday, October 24th, 2017 at 6:10 am and is filed under Education Savings Accounts, vouchers. You can follow any responses to this entry through the RSS 2.0 feed. You can leave a response, or trackback from your own site.