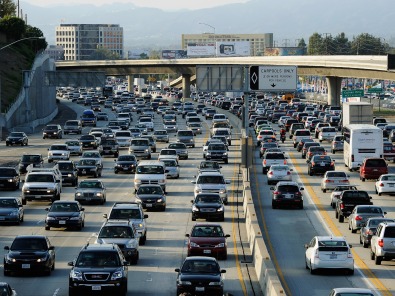 The problem: too many choices?

The abundance of choices among competing grocery stores is “clogging” our roads, according to an Australian academic who advocates assigning people to government-run grocery stores based on the location of their home:

Almost 60 per cent of Melbourne shoppers are bypassing their local grocery store, according to world-renowned academic John Hattie.

Professor Hattie said ‘food choice’ had led to a “clogging of the motorways” as shoppers avoided their neighbourhood grocery store in pursuit of alternatives.

Food choice has also fuelled unhealthy competition between grocery stores, he told a packed lecture theatre at the University of Melbourne on Tuesday evening.

“Nearly all this choice is based on hearsay, the flavor of the food, and rarely on whether the food is or isn’t adding nutritional value to the shoppers’ health,” he said.

All right, all right. If you’re a regular reader of the JPG blog, you’ve probably already deduced that I changed the words “school” and “students” to “grocery stores,” “food,” and “shoppers.” Here’s what Professor Hattie actually argued:

Almost 60 per cent of Melbourne students are bypassing their local school, according to world-renowned academic John Hattie.

Professor Hattie said school choice had led to a “clogging of the motorways” as students avoided their neighbourhood school in pursuit of alternatives.

School choice has also fuelled unhealthy competition between schools, he told a packed lecture theatre at the University of Melbourne on Tuesday evening.

“Nearly all this choice is based on hearsay, the nature of the students, and rarely on whether the school is or isn’t adding value to the students’ learning,” he said.

Frankly, it’s no less absurd than the modified version.

So-called “experts” demonstrate their own hubris and contempt when they proclaim from their ivory towers that they know better than the little folks below, despite lacking any local knowledge about a particular student’s aptitude, interests, or learning needs. Aside from the fact that the best international evidence suggests that school choice boosts student outcomes (i.e., on average, the parents outperform the central planners), educational choice is an end in and of itself.

Moreover, although I don’t think education policy should be used as a lever to promote environmental goals, research from Professor Bart Danielson suggests that school choice policies are more environmentally friendly than district-based systems. Countless parents have fled urban areas to rescue their children from failing district schools–the “white flight” that Hattie decries–which contributes greatly to suburban sprawl. According to Danielson’s research, parents are more likely to remain in urban areas when they have more educational options, thereby reducing their carbon footprint.

In short: the “clogged roads” argument against choice is as spurious as it is silly.

This entry was posted on Tuesday, June 21st, 2016 at 2:29 pm and is filed under Uncategorized. You can follow any responses to this entry through the RSS 2.0 feed. You can leave a response, or trackback from your own site.