Learning from our mistakes in expanding parental choice

The Kisida, Wolf and Rhinesmith survey of attitudes of private school leaders in Florida, Indiana and Louisiana released today by AEI has a ton of important information. I commend the authors for releasing it, as the data gathered reveals the cost of attempting to regulate private schools participating in private choice programs.

In particular, the evidence seems to point in the direction of requiring schools to give a test tied to the state curriculum, requiring a great deal of paperwork, and only making low-income students from the lowest performing school eligible represents creates a powerful incentive for schools not to participate. In other words, Louisiana should examine the results of this study carefully and make some significant adjustments if they would like more of the 70 percent of private schools that chose not to participate to make seats available. Let’s just go ahead and put it on the table that the 30 percent of participating schools likely have financially desperate organizations over-represented, and the 70% of non-participants probably have higher percentages of stable organizations and high quality seats.

Florida does make provision for standardized testing, but allows schools to choose their own test. Florida law has an ongoing third-party academic evaluation of the trends in scores for the program. Indiana also mandates state testing, but had effectively done so years before the creation of the choice program. Every state has varying levels of regulation and laws that apply to private schools irrespective of whether or not they have a choice program, meaning that the impact of a heavy-handed will vary from state to state based on this and other factors.

Take a look at the fourth item down from the top. Ok- now Louisiana: 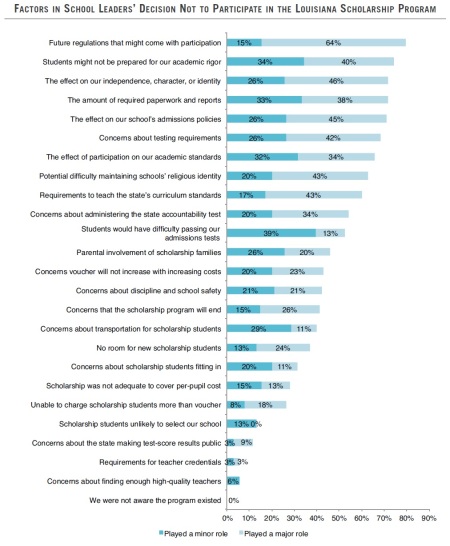 We create these programs in order to expand opportunities for students. Policymakers must carefully balance the public’s interest in academic transparency with the interest in private schools in maintaining their distinctive character and independence. Opinions of this subject are diverse, but far too many in my view have been consumed with a simplistic notion that giving the state’s (often subpar) test somehow equates with “accountability.” The word means being held responsible, but there is a whole bunch of state testing going on, but precious few being held responsible for much. Private schools already commonly use tests like the Stanford 10 and Iowa Test of Basic Skills and I’ve yet to see anyone make a convincing case that these tests won’t do just fine in providing transparency without saddling private schools with a state mandated curriculum.

Just as a quick thought experiment, suppose every state in the union ditched their state test (some of which are decent and some of which may as well be He-Man and the Masters of the Universe coloring books) and replaced it with one of the national norm tests. How would “accountability” be diminished? If you have a coherent answer please leave it in the comments. If you have an undying irrational attachment to the eternal beauty and truth of state tests uber alles, don’t bother unless you can explain why.

I know a few of the decision makers in Louisiana, and can attest that the road to this hell was paved with good intentions. No one woke up in the morning, stretched and yawned, and said “I want to create a choice program for disadvantaged kids that 70% of the private schools in the state won’t touch with a ten-foot pole.” That is not at all what happened, but the end result has been the same.

You live and learn- it is time to learn.

This entry was posted on Wednesday, January 21st, 2015 at 3:07 pm and is filed under vouchers. You can follow any responses to this entry through the RSS 2.0 feed. You can leave a response, or trackback from your own site.

11 Responses to Learning from our mistakes in expanding parental choice