I had the opportunity to testify to the Senate Education committee in Texas today on the experience with parental choice programs for special needs children. One of the items of discussion was the following chart: 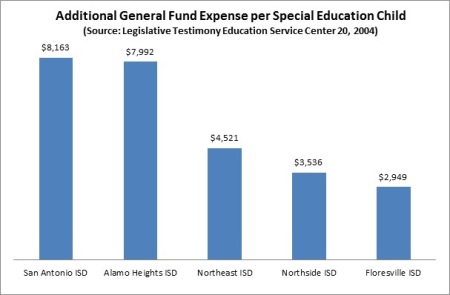 Stanford economist Caroline Hoxby also testified to this interim committee in 2004, and she made the point that since school districts have been complaining that states don’t cover the full costs of special education for decades, that they have no cause to complain about students leaving with their (inadequate) funding. Districts can either keep these funds in the general education effort, or spend more on their remaining special education students (approximately 5% of Florida special education students directly utilize McKay but far more benefit from it) but either way they benefit.

This entry was posted on Tuesday, March 5th, 2013 at 10:29 am and is filed under school funding, special ed, vouchers. You can follow any responses to this entry through the RSS 2.0 feed. You can leave a response, or trackback from your own site.

6 Responses to Heads You Win, Tails You Still Win