True to Her Traditions – At Last 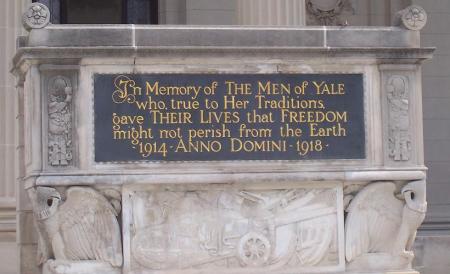 On Veterans Day two years ago I posted a sharp condemnation of my grad school for its contempt of the military, even in defiance of its own traditions. In the comments, I made a promise that I would be prepared to post something more cheerful for Veterans Day “when the Ivies quit spitting on the people who fight and die to preserve their right to spit on them.”

Yale is bringing back ROTC, along with Harvard and Columbia. Princeton refuses to budge. Brown is still considering its position. Cornell, Dartmouth and Penn had already brought it back before this year.

I’m not sure at what point my stated obligation to “post warm fuzzies about mom and apple pie” kicks in, and I’ll admit that I don’t think the series of events leading up to these developments generally augers well for civil/military relations. But that war is over and now is a time for reconciliation. Six of the eight Ivies now offer military training within their for-credit educational curricula. That is progress.

This entry was posted on Friday, November 11th, 2011 at 12:15 pm and is filed under civic values, higher education. You can follow any responses to this entry through the RSS 2.0 feed. You can leave a response, or trackback from your own site.

4 Responses to True to Her Traditions – At Last