This morning’s Journal declares 2011 “the year of school choice.” For those of us who kept the fires of justice burning when others counseled despair, it’s a sweet moment.

The Journal also gets the big picture:

Choice by itself won’t lift U.S. K-12 education to where it needs to be…But choice is essential to driving reform because it erodes the union-dominated monopoly that assigns children to schools based on where they live. Unions defend the monopoly to protect jobs for their members, but education should above all serve students and the larger goal of a society in which everyone has an opportunity to prosper.

In totally unrelated news, Jim Geraghty provides a delctable roundup on the NEA’s unprescedented year-early endorsement of Barack Obama – a naked admission that the union no longer has any leverage beyond its mere access to cash and warm bodies, and is therefore now a captive to the movements of power politics rather than a major player in driving them. From now on, the unions do what their political masters dictate, not the other way around.

Geraghty’s political analyst breaks it down:

I can only think of one reason for this move, the Obama people are going into over drive to get as much into Obama’s coffers as possible, and thus asked for this explicitly.  These are action of a very desperate campaign…on both sides. The Obama administration obviously is not raising enough money; the NEA is losing friends on the Democrat side of the aisle (see Cuomo).

Geraghty also points to this comment on Daily Kos:

I am a building rep for the NEA.  I actually spoke personally with about 2/3 of my unionized teachers when the early endorsement – the first such in NEA history – was proposed. Out of the more than 80 teachers with whom I spoke only one supported the early endorsement. Many did not like giving up what little leverage the union had with the administration.

The comment just gets better from there – go read the whole thing. And there’s more where that came from!

In resopnse to these concerns, a team of spokespeople for the NEA released the following joint statement: 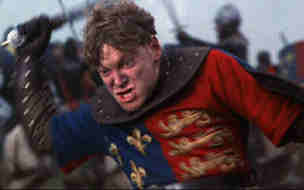 ORLÉANS: O Lord, the day is lost! All is lost!

DAUPHIN: Dear God! All is lost, all! Regret and everlasting shame sit on our helmets, mocking us.

[A brief blast of battle noises]

What stinking luck! Do not run away.

CONSTABLE: Our men have all broken ranks.

DAUPHIN: O, everlasting shame! Let’s fall on our swords. Are these the wretches that we threw dice for?

ORLÉANS: Is this the king we offered to ransom?

BOURBON: Shame, eternal shame, and nothing but shame! Let us die honorably. Back into the fray once again! He who will not follow me now, let him depart and stand in the doorway like a pimp, cap in hand, while some slave, no nobler than my dog, violates his daughter.

CONSTABLE: Maybe we can benefit from the same chaos that has defeated us. Let’s go offer up our lives en masse.

This entry was posted on Tuesday, July 5th, 2011 at 8:43 am and is filed under politics, teacher union, vouchers. You can follow any responses to this entry through the RSS 2.0 feed. You can leave a response, or trackback from your own site.