Attack of the Killer Vouchers! 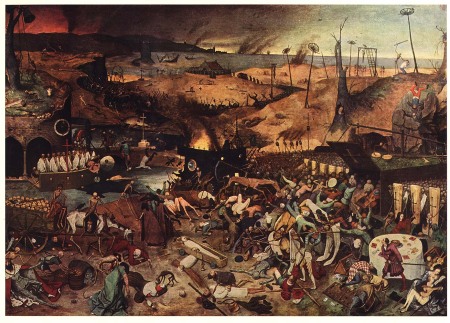 Bruegel’s “The Triumph of Vouchers”

Yesterday we learned about the horrible massacre of the innocents in Milwaukee Public Schools. Confronted with evidence showing substantially higher graduation rates in private schools participating in the city’s voucher program than in public schools, a public school official cited “mortality” as an excuse.

No doubt it won’t be long before they announce that Milwaukee public school students are dying in such large numbers because of the voucher program!

You doubt it? The journal Environmental Science and Technology has already published an article – carefully peer reviewed using the same totally neutral and non-corrupted system they use for all the other climate science – finding that school vouchers cause global warming. You see, vouchers irresponsibly permit parents to choose whether and how far to drive their students to school, thus recklessly increasing the levels of the dangerous chemical globalwarmic hysteriphate in the atmosphere, further sapping the purity of our precious, precious bodily fluids.

And since it’s already an established scientific fact that global warming causes everything bad, it follows as night follows day that vouchers, by causing global warming, cause mortality in Milwaukee public schools.

Now if only we could find a way to protect our children from this threat . . . if only there were an education policy that were proven to improve school safety by moving students from less safe schools into more safe schools. Hmmm…

This entry was posted on Tuesday, February 2nd, 2010 at 3:54 pm and is filed under vouchers. You can follow any responses to this entry through the RSS 2.0 feed. You can leave a response, or trackback from your own site.

8 Responses to Attack of the Killer Vouchers!