Ralph Teetor for Al Copeland Humanitarian of the Year

After careful consideration of various possibilities, including:

Cruise control makes driving far less burdensome, which not only makes our lives more enjoyable on a day-to-day basis, it also facilitates a great increase in long-distance travel and reduces shipping costs by reducing not only the labor burden but also the cost of gas (since cruise control is more fuel-efficient). The truckers have a bumper sticker showing a stork delivering a baby, with the tagline “everything else you have arrived by truck.” Well, if that’s true, then anything that lowers the cost of trucking must have tremendous reverberations throughout the economy – which is to say, we’ll never know just how much our lives have been enriched by it.

Oh, and it saves lives. Lots of them. The professional safety narcs strongly resisted the introduction of cruise control on grounds that it would lead to inattentive driving and more deaths. But in fact it led to more uniform driving, with everyone going the same speed and therefore a big drop in the frequency of cars passing each other, and thus a dramatic drop in deaths.

P.J. O’Rourke contacted some of the professional safety narcs to ask them whether they were sorry for having opposed something that turned out to dramatically increase safety. If memory serves, I believe they were unrepentant. No doubt they were worried they’d have to give back the Nobel Peace Prizes they’d won for opposing it.

I chose to focus on cruise control because I thought it fit the values of the Al Copeland award most closely, but it’s worth noting that Teetor was a prolific engineer and inventor – he and his cousin built their first car, with a one-cylinder engine, at age 12 – and contributed far more to our lives than cruise control. In his first job out of college he developed a better way to balance steam turbine rotors in the torpedo boat destroyers we used to kick the Kaiser’s kiester in WWI. Later he ran a company that made piston rings for car engines, supplying Packard, General Motors, Chrysler and Studebaker.

Teetor got the idea for cruise control after a jerky and uncomfortable car ride. His lawyer, driving the car, was an incessant talker and paid more attention to the conversation than the car’s speed, letting the car speed up and slow down as his attention wandered.

Teetor secured the patent for automatic car speed control in 1945, dubbing it Controlmatic. It would later be called Touchomatic, Pressomatic and Speedostat before finally being christened cruise control. The technology was first offered on three Chrysler models in 1958. By 1960 it was available on all Cadillac models.

Oh, and did I mention that Teetor did all this after being blinded in a shop accident – at age five?

I proudly nominate Ralph Teetor for the Al Copeland award.

Now if only he had developed a control for this kind of Cruise: 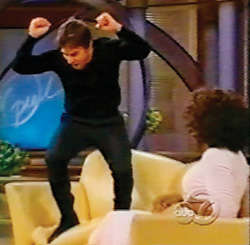 This entry was posted on Thursday, October 15th, 2009 at 8:29 am and is filed under Al Copeland Humanitarian Award, tributes. You can follow any responses to this entry through the RSS 2.0 feed. You can leave a response, or trackback from your own site.