Pass the Popcorn: Things Are Looking Up – Or Are They?

Well, I’m going to owe a lot of people their money back on this post. Bowled over by the new Star Trek film (which you should really go see if you haven’t already) I overconfidently predicted that it would be the best movie of the year, and offered a refund on the price of the blog post to anyone who felt differently at year’s end. My reasoning at the time – as I explained in the comment thread – was as follows: “Take a look at what else is on the docket for this year. See anything that’s likely to be better?”

Guess what I had completely and totally forgotten about?

When I realized that a Pixar movie was coming out this summer, here’s what I felt like: 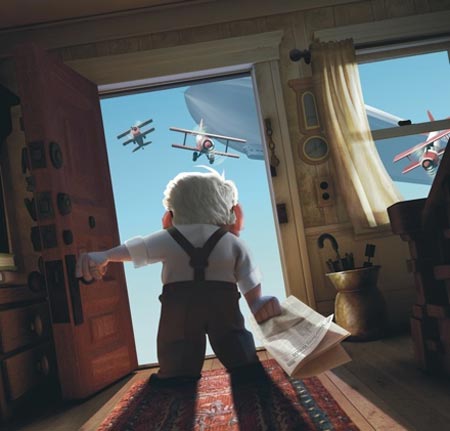 But who knows? Pixar has been less than stellar in the past – remember A Bug’s Life and Monsters Inc.? Both are better than the average family movie, but to say that is damning with faint praise.

And UP comes to us from a relatively untested creative team. It was written by Bob Peterson and co-directed by Peterson and Pete Docter. Both have accumulated some secondary credits at Pixar – Peterson got secondary writing credits on Finding Nemo and Ratatouille; Docter got “story” credits on both Toy Story movies, Monsters Inc. and Wall-E; both have worked on Pixar shorts, direct-to-video projects, videogames, etc. (Peterson was also the voice of Ray the science teacher in Nemo and Roz the bureaucrat-cum-deus-ex-machina in Monsters.) Neither seems to have done much outside Pixar.

Between the two of them, there’s only one topline credit before UP. Guess what it is?

Let’s see how far back we have to go before we find a Pixar movie with a similarly untested creative team:

Wall-E: Written and directed by Andrew Stanton of Finding Nemo

Ratatouille: Written and directed by Brad Bird of The Incredibles and The Iron Giant (a masterpiece you really must see if you haven’t yet)

The Incredibles: Written and directed by Brad Bird of The Iron Giant

Finding Nemo: Written and directed by Andrew Stanton of . . .

. . . well, OK, I guess the last time we had an untested creator at the helm, we did pretty well, didn’t we?

But guess when the last time before that was? Monsters Inc. Directed by Pete Docter.

I suppose I’m being overly pessimistic. It’s partly because I don’t want to have to shell out all that money on my ill-advised guarantee.

But I have another reason to suspect UP will be no good – I loved the teaser trailer.

So up until now the teasers have been awful and the movies have been great. What does it say that the teaser for UP made the movie look really good?

This is the second of what I guess will be an annual series of Pass the Popcorn entries on Pixar. I don’t think I can top what I said in the first edition, so I’ll stop here.

Except I will note that the plot synopsis for Toy Story 3 has changed pretty radically since I first expressed such trepidation about it. Before, there was a whole paragraph, which I don’t remember in detail but it was about Woody and Buzz getting thrown away after Andy grows up. Now it’s just one sentence, and Woody and Buzz are ending up in a day care. That sounds much more promising.

This entry was posted on Friday, May 29th, 2009 at 8:59 am and is filed under Pass the Popcorn. You can follow any responses to this entry through the RSS 2.0 feed. You can leave a response, or trackback from your own site.

7 Responses to Pass the Popcorn: Things Are Looking Up – Or Are They?