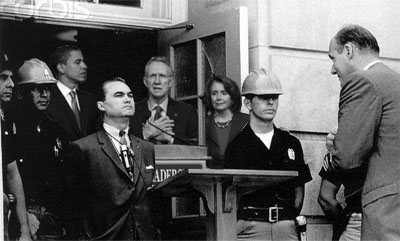 Rotherham’s cynical take looks a little more on target this morning, while my own optimism looks a bit more naive. This morning the Washington Post ran an editorial blasting the United States Department of education for their latest attack on the DC Opportunity Scholarship program.

EDUCATION SECRETARY Arne Duncan has decided not to admit any new students to the D.C. voucher program, which allows low-income children to attend private schools. The abrupt decision — made a week after 200 families had been told that their children were being awarded scholarships for the coming fall — comes despite a new study showing some initial good results for students in the program and before the Senate has had a chance to hold promised hearings. For all the talk about putting children first, it’s clear that the special interests that have long opposed vouchers are getting their way.

It’s a choice President Obama made when he enrolled his two children in the elite Sidwell Friends School. It’s a choice Mr. Duncan had when, after looking at the D.C. schools, he ended up buying a house in Arlington, where good schools are assumed. And it’s a choice taken away this week from LaTasha Bennett, a single mother who had planned to start her daughter in the same private school that her son attends and where he is excelling. Her desperation is heartbreaking as she talks about her daughter not getting the same opportunities her son has and of the hardship of having to shuttle between two schools.

Sadly for LaTasha Bennett and her children the above photo is increasingly becoming less of a pointed joke and more of a reality.  How can anyone feel anything other than dismay to watch the nation’s first African American President, himself a product of private education, enroll his own daughters in an elite private institution and then rip that same opportunity away from people like LaTasha Bennett?

This action is in stark contrast with everything for which the left allegedly stands. As George Orwell once wrote: Four legs good, two legs better! The Washington Post makes it clear why the administration is behaving so disgracefully:

It’s clear, though, from how the destruction of the program is being orchestrated, that issues such as parents’ needs, student performance and program effectiveness don’t matter next to the political demands of teachers’ unions. Congressional Democrats who receive ample campaign contributions from the National Education Association and the American Federation of Teachers laid the trap with budget language that placed the program on the block. And now comes Mr. Duncan with the sword.

Duncan and Obama should both be ashamed of themselves.

This entry was posted on Saturday, April 11th, 2009 at 7:20 am and is filed under vouchers. You can follow any responses to this entry through the RSS 2.0 feed. You can leave a response, or trackback from your own site.