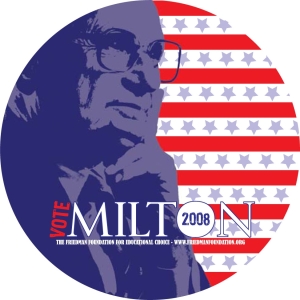 Did Milton Friedman support school choice programs where the financing runs through the tax code rather than the treasury? He always made it clear that if he had a choice between them, he preferred vouchers (funded through the treasury) over either of the two alternatives forms of school choice that use the tax code (direct tax credits for families to offest thier tuition costs or scholarships distributed by charitable organizations and funded by donations that make the donor eligible for a tax credit). But that doesn’t mean he didn’t support the tax-code alternatives or didn’t consider them to be “true” school choice programs.

I bring this up because Robert Enlow of the Friedman Foundation has dug up a letter that Milton wrote in support of Florida’s tax-credit scholarship program. The letter was written on May 17, 2005 and was addressed to a Florida corporate leader who was considering whether or not to support the program.

I agree with you completely that the tax code should be used solely to raise revenue to fund necessary government spending and not to create social policy. Unfortunately, in schooling, the tax code is already being used to create social policy, by devoting tax funds to maintaining a socialist education system. If the state decides to subsidize the schooling of children, the straightforward way is to provide a voucher to each parent and let the parent choose the school that he believes is best for his or her children. Let the private market provide the schools. If the state wants to set up schools, let them charge tuition and compete with private schools on a level playing field.

Unfortunately, for reasons we are both well aware of, ranging from unions to school administrators and religious concerns, that ideal solution is not feasible.** Where it has been feasible to any significant extent, as in Milwaukee and the Florida Opportunity Scholarship Program, it has worked well. But again and again, as currently in Florida, an inferior tax credit program seems the only political option. Tax credits are an indirect, and I believe less efficient, way to do what vouchers do more directly. But they do promote the basic objective, of expanding parental choice and thereby introducing more competition into the educational industry. As a result, I have reluctantly supported tax credit programs in a number of states.

Let me just repeat, the tax system is being used for social purposes with both vouchers and tax credits.

**I think we may take it as given that he means “not currently feasible in Florida.” Any attmept to attribute to Milton Friedman the view that vouchers were “not feasible” in general would be absurd in light of his continuing active support for voucher efforts right up to the end of his life.

We see that openness in this letter. He admits that his support for tax credits is only as a second-best option and even says the he supports them “reluctantly.” But if you knew Milton even a little bit – and I was only privileged to know him a little bit before he died – you know that he wouldn’t say he supported them at all unless he really supported them. The emphasis here is on the support, not the reluctance; the reluctance only comes in because (as the opening sentence makes clear) he’s addressing an audience that shares his concerns about tax credits.

This entry was posted on Wednesday, October 15th, 2008 at 9:18 am and is filed under personal tax credits/deductions, tax-credit scholarships, vouchers. You can follow any responses to this entry through the RSS 2.0 feed. You can leave a response, or trackback from your own site.