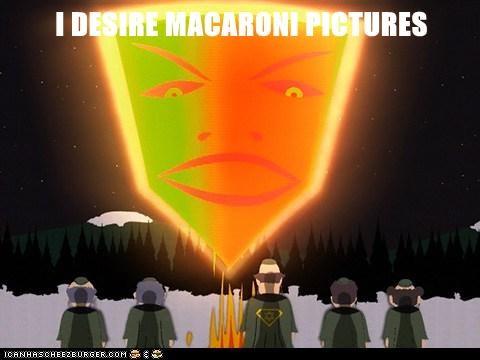 “I desire macaroni pictures! And those little shaker things where you put beans inside of paper plates that are glued together! And let us put patterns of glue on the outside of those paper plates so we can then pour glitter on them so they look nice and sparkly!”

As I drop the kids off at sleep-away summer camp, I’ve been thinking about whether school should be more like camp.  At camp the kids learn an enormous amount, including a large amount of traditional academic content.  Two of my children are at a Jewish camp where they learn Hebrew and Judaics in addition to more typical camp activities.  (And no, there is no giant Moses in the shape of the CPU from Tron demanding macaroni pictures).  My oldest goes to a special needs camp that offers an emphasis on independent living skills (just like school) in addition to the usual camp stuff.

They all learn a lot.  But unlike school, the kids love it.  Don’t get me wrong, they like school quite a bit — but they love camp.  They love it even though they are made to do all sorts of challenging or sometimes unpleasant things that they rarely do at home.  They have to do all of the cleaning, they serve and clear all of the meals, and they fold their own clothes.  It can be broiling during the day and freezing at night.  They help tend farm animals.  They climb to the top of a high tower.  They go for long hikes.

The camps my kids go to have very nice facilities and are considered expensive.  Their camps offer activities not usually found at other summer camps, including go-carts, mountain biking, computers, water trampolines, and tennis.  The ratio of counselors to campers at the Jewish camp is less than 5 to 1, and at the special needs camp is about 2 to 1 (including specialists).

How are these camps able to teach kids a lot, get them to work hard, and get the kids to love it, while schools struggle to do any of these things?

How do sleep-away camps get kids to work hard, learn a lot, broaden their experiences and love it — all for less than the cost of public schooling?  A big difference is that most of the counselors are young, college kids.  They don’t get paid very much but tend to be enthusiastic, bright, and energetic.  Some will later be doctors or lawyers, but they are happy to be counselors for a few summers in the meantime.  It’s easier to get talented people for low pay for a short time than for an entire career.  Camps always have some wise old-hands to keep the young staff in check and to maintain the norms and mission of the organization, but camps mostly succeed at low cost because of their energetic young counselors.

Could schools be more like camps?  Could we hire a lot of enthusiastic, bright, and energetic teachers fresh out of college, who know full well that most of them will leave in a few years to become lawyers, doctors, or something else?  A few old-hands would stick around to keep the young staff in check and to maintain the norms and missions of the organization.  But schools could potentially attract more talented people as teachers at lower cost if they followed the camp model.  And perhaps schools with a high-turnover, young staff would better connect with students and convey the love of learning and working hard.

I know that current research finds that teachers tend to be less effective in their first few years and that turnover is harmful.  But those are findings about new teachers and high turnover under the current system that rewards teachers for sticking around for 20-25 years.  We can’t simply extrapolate from that to what would happen under a system that attracted a different crop of new teachers and where turnover was effectively encouraged (reform of the pension system and pay scale could move us in that direction).

Maybe the intensity of camp just couldn’t be sustained for an entire school year.  Maybe adding even a little more academic content would ruin the camp magic.  I’m sure many things would go wrong if we tried to make schools more like camps, but I think it’s worth thinking about what we can learn from camps to make schools more effective.

This entry was posted on Monday, July 21st, 2008 at 5:34 am and is filed under teacher pay, teacher quality. You can follow any responses to this entry through the RSS 2.0 feed. You can leave a response, or trackback from your own site.