So college students have lost interest in Education Majors: 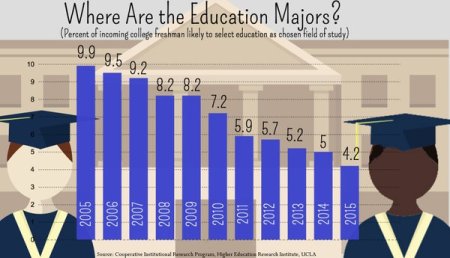 Some states are already experiencing growing teacher shortages, and some traditionally minded folks dream of spending our way out of this,  but absent some awesome spurt of sustained economic growth this seems implausible given things like this that come with an aging population: 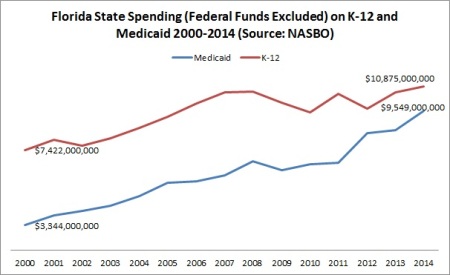 So student populations project to grow even while the traditional pipeline for teachers shows increasing spare capacity and Baby Boomer teachers retire and states face increasing fiscal strains. Did I miss anything? No? Good- that’s already gratuitous.

So rather than worry about this, perhaps it is best to view it as an opportunity. It’s not like the old-fashioned way of training teachers had much good to say for itself after all: 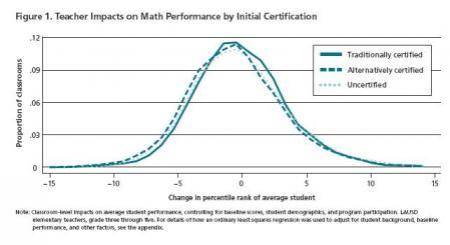 College students losing interest in ed majors hints at a broader need to re-imagine the teaching profession more broadly. The status quo is sinking, but a future of a smaller number of higher paid teachers leveraging technology to teach a greater number of students to higher average levels may be possible.

Keeping things the way they are now is neither desirable or possible.

…but other than that, it’s swell!

Let’s start with ineffective. Super chart! below from the Brookings Institute, you will recall, shows average gain scores in mathematics for three different groups of teachers: traditionally certified, uncertified and alternatively certified:

Next, let’s look at evidence from Paul Peterson and Daniel Nadler’s recent Education Next piece on certification.

There is some suggestive evidence that alternative certification programs help state teaching forces look more like the ethnic composition of their states. Another way to put this might be to say that requiring people to take 30 hours of course work for no apparent reason (see Super Chart! above) may have a disproportionate impact on minority students. Or, put another way, genuine alternative certification seems to provide more opportunity for minorities to enter the teaching profession.

Now “racist” is a tricky term. Some argue that the SAT exam is racist, as it has a disproportionate impact on minorities. From what I understand, the SAT does successfully predict college success to a large degree, while teacher certfication does not predict student gains (see Super Chart! above).  If so, by my way of thinking, the SAT is not racist, while teacher certification may be, de facto.

Finally, Peterson and Nadler show that the 21 states who have done more than symbolic alternative teacher certfication have made larger than average gains on NAEP.

This of course does not prove that alternative certification caused the faster gains, but they certainly didn’t prevent these gains. Florida, a leader in alternative certfication, has about half of their new teachers coming from alternative routes. As you can see, it doesn’t seem to be hurting their academic achievement.

As the figure below shows, Florida’s free and reduced lunch eligible students now outperform the statewide average in my home state of Arizona.

As one of Jay’s neighbors once said, it’s time for a change in how we train, recruit and compensate teachers.