The 19th Edition of ALEC’s Report Card on American Education: Ranking State Performance, Progress and Reform coauthored by yours truly and Dave Myslinski hit the presses today. Lots of good stuff in this year’s model, including an update of state rankings, a review of the first decade of universal NAEP participation, and a chapter focused on comparing the results of large urban districts.

So going up to the 30,000 level and back down, international results show that the United States is world-class in spending per pupil, not so much in learning per pupil, and that our results for Black and Hispanic students are closer to those of Mexico than of South Korea, despite the fact that Mexico has a far larger poverty problem and spends a small fraction of American spending.

The United States is making progress, but only an average amount of progress so we aren’t going to be catching up  much at the current pace. When you break down American results by state, you find that some states are pushing the national average cart, while others are riding in the cart. Which ones? Glad you asked: 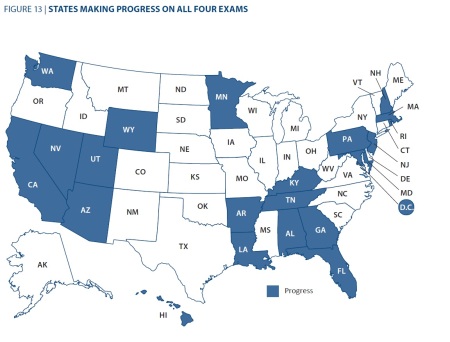 So the states in blue have made statistically significant gains in all four regular NAEP tests (4th and 8th grade reading and math) between 2003 and 2013.  Of the 21 states pulling that feat off, 14 are located in either the West or the South. The Midwest excepting MN, Great Plains, Mid-Atlantic, New York and Texas didn’t carry their weight on improvement (to varying degrees in general math gains were easier to come by than reading, 4th grade improvement easier than 8th grade) during this period. Michigan was the only state to make no significant progress on any of the four regular NAEP exams, a trend I hope they will reverse soon. All other states made progress on one or more of the exams. Note also that this map only shows improvement, few if any of the darkened states have internationally competitive scores, and the few that do tend to hold the good end of the stick on various achievement gaps.

So on the one hand, American education outcomes have never been higher than the 2013 NAEP.  On the other hand, no one yet has any cause for celebration. When we have any states that approach a Asian/European level of bang for the buck in learning outcomes, we’ll let you know about it, but thus far, not so much.

In Chapter 4 of the Report Card we take a close look at the Trial Urban District Assessment (TUDA) NAEP and apply the same “general education low-income” student comparison that we use in the states to improve comparability. Low-income general ed kids were seven times more likely to reach the Proficient level of 4th grade reading in Miami (the top performing district) as in Detroit (the lowest performing). Mind you have only a little better shot at 1 in 3 of scoring Proficient in Miami, so there are many miles to go. Looking at both 4th and 8th grade reading, Miami, New York City, Hillsborough County FL (Tampa) and Boston cluster near the top of the ratings. The District of Columbia does not (yet) rate near the top of the ratings, but their progress over time on NAEP is nothing short of remarkable since the mid 1990s. A large percentage of District students attend charter schools these days, and those charter schools show not only higher scores but also faster improvement than district schools, which are themselves improving.

In any case, slide on down to the following link if you want to see how your state is doing. 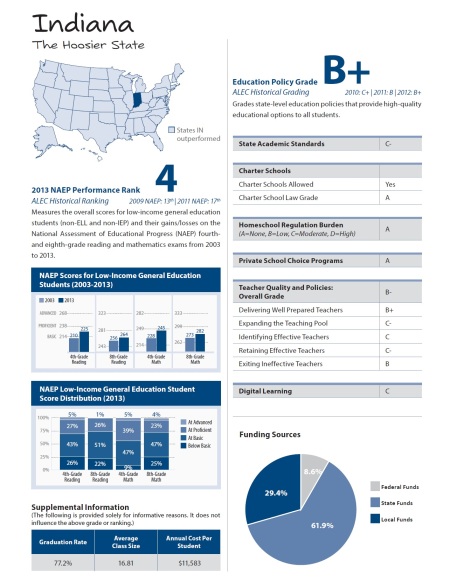 The American Legislative Exchange Council released the Report Card on American Education: Ranking State K-12 Performance, Progress and Reform today coauthored by yours truly, Andy LeFevre and Dan Lips. Follow the link and check out our rankings of state NAEP performance based on the overall math and reading scores and gains of general education low-income children, and our “poll of polls” grades for K-12 policy in each state.

Everyone interested in education reform should read this book. Using a method that—by focusing on the achievement of low-income children—allows for apples-to-apples comparisons across the states, the authors present a treasure trove of eye-opening performance data and arrive at a ranking of state performance that reveals both surprising success and shocking failure. The book is well worth reading for the data alone. But it also offers a good deal more, from research summaries to methodological clarifications to model legislation—and concludes with an insightful discussion of the high-powered reforms that have helped some states out-perform others, and that offer the nation a path to improvement. I should add, finally—and with genuine admiration—that the book is beautifully written and a pleasure to read: something I can rarely say about a data analysis.

JPGB readers will of course realize that this is quite a tribute to Andy and Dan, given your painfully intimate knowledge of my garbled writing. Thanks also to Jeff Reed and Dave Myslinski from ALEC (Jeff is now rocking and rolling at the Foundation for Educational Choice), Jay and my Goldwater Institute comrades.

Check it out and let me know what you think. Be nice though: today is my birthday, which makes me even more emotionally volatile than usual.

UPDATE: Here is a link to the PDF.

As suggested by the title, we grade each state by their academic performance, their academic gains and their K-12 reform policies. On the later, we use a “poll of polls” technique and average the grades assigned for particular policy areas on academic standards, teacher quality, charter school laws, private choice, digital education etc.

Sneak peak: a B+ was the highest grade.

On the performance and progress, we utilize NAEP with an eye to maximizing comparability  between states. After all, no one can be shocked that Connecticut has higher NAEP scores than Mississippi, given the huge disparities in income between the two states.

We therefore judge each state based on the scores of free and reduced lunch eligible general education students on all four main NAEP exams: 4th grade reading and math, 8th grade reading and math. We use the period for which all 50 states and the District of Columbia have participated in NAEP (2003-2009). Using free or reduced lunch eligibility keeps the income range of students under a known limit, whereas non-free and reduced lunch kids can vary in income from still relatively hardscrabble to billionaires.

We made no effort to control for race or ethnicity despite the well-known existence of racial achievement gaps. This is because we believe that such gaps can in fact be closed. We believe that the gaps exist due to policy and cultural factors, all of which can be changed. Schools in particular are in the business (or should be) of promoting a strong academic culture focused on learning-aka controlling the culture of the school.

You’ve never heard of a racial combat effectiveness gap in the United States Marines Corps because it doesn’t exist. The fact that the Marines are a well-led organization with a strong culture has a great deal to do with that, as does the fact that every Marine is a part of the Corps by choice.

In any case, we do not claim that our NAEP rankings provide perfect comparability  just enormously better comparability  than looking at raw NAEP scores.

So you are dying to know whether your state rocked or sucked wind in the rankings. Calm down- pace yourself!

All will be revealed later in the week.