So states like Arizona and Florida are crushing the ball on interstate mobility– incoming outnumbering outgoing approximately 2 to 1.  Ergo it must follow that Arizona is “draining” California of people and money, and Florida is doing the same to New York. Perhaps we should tear up the interstate highway system- this whole freedom thing is messy and it hurts the feelings of those losing taxpayers. To the contrary- I argue we should embrace what Hesiod called “good strife” or what Craig Barrett termed “tension in the system” over at RedefinED.

In education tension in the system can nudge system of schools mired in allegations of corruption to encourage better performance, like for instance this: 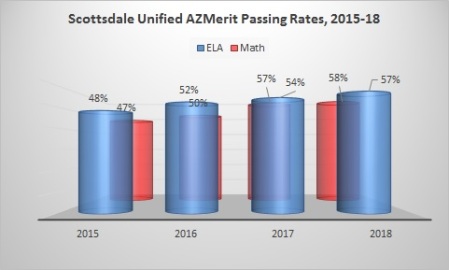 Granted you’ll have some in California, burdened as they are with all of that magnificent coastline and almost every other natural advantage imaginable, complain about having to compete with the likes of our humble patch of cactus. You see a similarly disturbing tendency for the advantaged to cry foul when the upstarts do well in education and elsewhere. There is a school of thought that holds that the practice of “amateur sports” was motivated by a desire on the part of British toffs not to be humiliated by working class heroes back in the day.  If California prefers to bemoan the cosmic injustice of people seeking happiness rather than putting their own house in order, I say to opportunity seekers-welcome to Arizona! Or as my cajun friends might paraphrase Hesiod: laissez la bon combat rouler chere!