The Education of High Performing Students

Fordham released an interesting report last week making the case for including high performing students as a subgroup in state accountability systems. Like most of you who spend your time reading obscure blogs written by wonks on a continuing mission to entertain themselves, I am sympathetic to the needs of high achieving students. In fact, recently a person who served as an official in the administration of Janet Napolitano when she was Governor of Arizona told me that gifted education was THE issue when they took office in 2003. The parents of gifted students were up in arms that there was very little to nothing to meet the needs of their children, and elected officials were hearing about it non-stop.

Then, I was told, the parents discovered BASIS charter schools. Things quieted down.

Arizona had badly over-exposed testing items in those days, and the dreaded worksheets drilling to those over-exposed items were too much in evidence once students reached the 3rd grade (the first year of state standardized testing). I experienced this first hand as a parent, and have heard the tale repeated many times in conversations with other parents during the sad, dying days of the AIMS exam. We called it “the 3rd grade wall.”  One of the priorities for those concerned with the education of high achieving students should be to maintain the integrity of the state testing system (aggressively curtailing item exposure and excessive district test prep) imo.

So anyway, I don’t have a problem with including high-achieving students as a subgroup, but I also don’t see it as strong tea.  The NAEP seems to suggest likewise. I ran cohort gains on 4th (2011) to 8th grade math (2015) for a relatively generic group of relatively high performing students- non-FRL eligible students in the general education program. Fordham identified four states as leaders in high-achieving subgroup accountability: Arkansas, Ohio, Oregon and South Carolina. 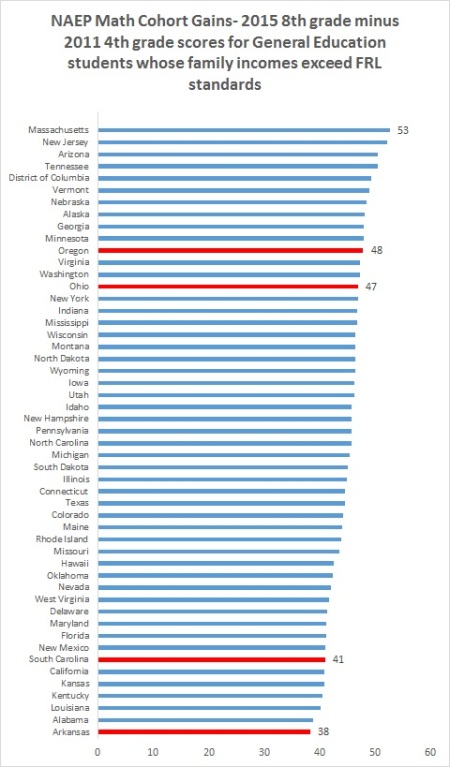 So putting on my social science cap, let me note that I have no idea what drives these numbers. One can certainly speculate with some confidence that socio-economics has something to do with it. Massachusetts and New Jersey top the list for instance, and just happen to be two of the four states with an average family income for a family of four in the six figures. DC also did well, but remember this is a very select slice of DC- the part that is knocking the ball out of the park. To the extent that policy has an impact on this (unknown) we should expect lags, etc. so try not to get too excited.

It’s hard to draw many conclusions from this, other than Arkansas’ dead last ranking seems to indicate that states need to do a great deal more than put high-achieving students in as a subgroup. My advice for Arkansas from the Cactus Patch (we are nipping at the heels of MA and NJ despite being much less wealthy and spending far less per pupil than either state btw) is, ah, see about passing some strong choice programs. Also, get BASIS on line one, stat.