Arizona lawmakers passed legislation tonight that will phase in near universal eligibility for ESA program. This will start with public school students in kindergarten and 1st grade, 6th grade and 9th grade in 2017-18, and then add grades from the on ramps (K,1,2 and 6,7 and 9-10 in year 2 and the next year K,1,2,3 and 6,7,8,9,10,11). The bill will also increase academic transparency and improve administration of the program.

Governor Doug Ducey’s stalwart support of expanding options proved crucial to this victory. Huge kudos to the bill sponsor Senator Lesko and Rep. Allen as well legislative leadership in both chambers and the members who took a tough vote in the face of determined opposition. Groups including the American Federation for Children, Americans for Prosperity Arizona, the Arizona Catholic Conference, the Arizona Chamber, the Center for Arizona Policy, Ed Choice, Excel in Ed and the Goldwater Institute all made vital contributions. Senator Worsley also deserves recognition as someone who played the role of honest broker in crafting a compromise that a winning coalition in each chamber supported. We’d all like to live in a world where there was no need to compromise, but that world is not the one we find ourselves in.

The Census Bureau recently announced that Maricopa County (Phoenix metro) as the fastest growing county in the nation-nudging out the Houston area. Enrollment growth is firing up again and the expanded ESA will give parents a broadening array of private educational choices to consider in what is already a robust public choice market. ESAs are an unfolding experiment in liberty, and future legislatures will debate further refinements and improvements, but this is the first big private choice victory of 2017, so…

New Report-Turn and Face the Strain 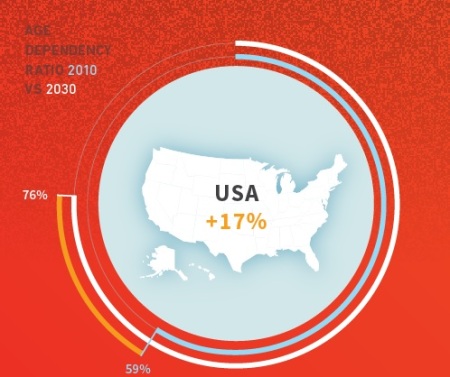 Excel in Ed and the Friedman Foundation have co-released a study on state age demographics authored by yours truly.  The title reflects a couple of different things. First, I dig me some Bowie. Second, people are generally aware of the looming crisis in age demography we face, but they primarily have it framed as a federal issue. With 10,000 baby boomers reaching retirement age every day between now and 2030 (when they all reach retirement age) this certainly does represent a federal issue- trillions of dollars of unfunded liabilities in Social Security and Medicare, etc. The federal issue is not the only issue…

State policymakers must turn and face the strain that changing age demography will have on state government in the form of Medicaid, public pensions, a drag on economic growth and in many states an increasing K-12 population. Spoiler alert but all states have it bad with some states having it far worse than others.

The Baby Boom generation has already started retiring, and will be sending their grandchildren off to school. The United States Census Bureau projects the percentage of working age people to shrink in every state, meaning fewer people in the prime earning (and thus taxpaying) years to support a growing number of seniors and youth.  All states will be getting older, with only a handful of states projected to have a smaller elderly population than 2010 Florida by 2030. Many states also face large projected youth population increases.  With Medicaid currently constituting 23 percent of the average state budget and education approximately half, a fierce battle between the need for health and education spending looms with fewer working age people to foot the bill.

A great many of the working age population of 2030 btw sit in American classrooms right now. According to NAEP around a third of them can read proficiently. While a broad and difficult rethinking of the provision of vital public services will prove necessary including especially subjects such as health, pensions, immigration-the most urgent need is to improve both the effectiveness and cost-effectiveness of the K-12 system.

Most of the K-12 debate ultimately boils down to whether or not to change the status-quo. The status quo however is going to change us whether we like it or not.

More over on the EdFly blog, let me know what you think.