Watch the break that Max Ashton, one of the first generation of ESA students, Brophy Prep graduate and now Loyola Marymount student gets on this first pitch at the Diamondbacks game! This video has gone viral over the last week.

For a video showing Max in action in the ESA program, our friends at Heritage have you covered:

Congrats to Senator Debbie Lesko and the band of happy school choice warriors for passing SB 1279 today, which would phase in making all Arizona public school students eligible to participate in the Empowerment Scholarship Account program. 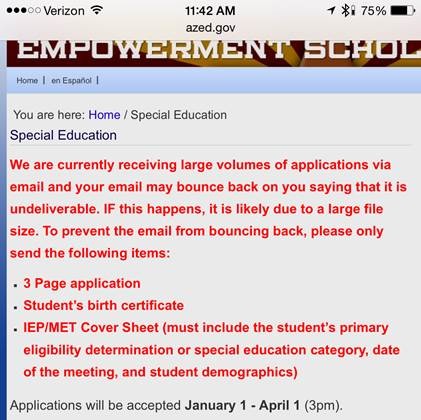 The ESA application period for next year ends tomorrow in Arizona. Nice problem to have (image from the AZ Department of Education ESA page). H/T Kim Martinez, American Federation for Children.

Peshek on ESA legislation around the nation

My colleague Adam Peshek has a post up about the progress of ESA legislation around the country, including the above map. I would like to again thank my friends in the Arizona school district industrial lobbying complex. Without their having made the grave mistake of filing suit against two tiny voucher programs for children with special needs and foster care students, we would not be having this conversation today!

Most of the bills are in fact conversation starters, but one of those (in Virginia) passed one house and failed on a tie vote in the other.

Which state will be the next to turn red on Adam’s map? As an old football coach once told me “it depends on who is the bestus and wants it the mostus.”

Stay tuned to this channel…

UPDATE : The Mississippi House passed a special needs pilot program today 65-51, now heads to the Senate to be reconciled. Oklahoma effort pushed to next year’s session.

Arizona lawmakers ended an incredibly difficult legislative session last night by expanding school choice.  The Empowerment Scholarship Accounts program made kindergarten students otherwise eligible to participate (children with a disability, living in a D or F rated school or district boundary, foster care or the child of an active duty military) eligible to participate without prior public school attendance. The new law also shifts the funding for the program to the charter school formula, which will increase the minimum funding received and should make participation more feasible for students attending D and F schools and children with disabilities funded at the lower levels under the Arizona formula more feasible.  A separate tax credit bill expands the types of corporations allowed to participate in the corporate scholarship tax credit program. Both measures are on their way to Governor Jan Brewer’s desk.