For the Al: Mildred Day

For Mildred Day profile in Sept. 30, 2012 Famous Iowans column. Photo from the 1933 Pillsbury cookbook. In that photo, Mildred is on the left. The woman in the oval photo is named in the text there (Mary Ellis Ames, I think) and was sort of a mythical Betty Crocker character. I hope you can use this photo as it shows the young, working Mildred in a kitchen. The family was kind to let us use it. (Special to the Register)

Food is one of the most basic human experiences, so improving food has huge leverage for serving humanity. Even the act of eating, while it can be done alone, is better when done together – expressing the same basic harmony of human flourishing reflected in The Al’s commitment to the idea that one can benefit oneself and others at the same time.

The very first person ever nominated for The Al after Copeland himself was Steve Henson, inventor of ranch dressing. In the ten years since then, we’ve nominated people who invented ways to make wine more efficiently, invented ways to experience the magic of great food and great movies together, and invented ways to protect kids who sell lemonade. Yet somehow, we have never again nominated another person who invented a food item – which would seem to be a pretty basic prerequisite for all the other stuff.

Why not give The Al to the woman who invented the single greatest food of all time?

Day first worked at Pillsbury under noted chef Mary Ellis Ames (in the picture of Ames’ kitchen above, Day is the woman standing on the left). Day was then employed by Kellogg’s as a recipe tester (doesn’t that sound like a nice gig?) and a traveling cooking instructor who trained chefs in Kellogg’s kitchens as well as giving demonstrations to customers. She and Jensen cooked up the idea in the mad science lab of the Kellogg’s mothership (I’m picturing lots of oddly colored liquids bubbling in cauldrons and test tubes).

Curiously, the invention of Rice Krispies was not the main contributing factor in the invention of Rice Krispies Treats. Earlier recipes for similar kinds of treat squares had used puffed rice or puffed wheat. But they had never used marshmallow, relying instead on other sticky confections such as molasses. Day’s main contribution was to realize that marshmallow would work much better.

Six months after the first treats were baked (“Live! Live, my creation!” I envision Day crying out, as a bolt of lightning activates the oven), Day got a request from a Camp Fire Girls chapter in Kansas City looking for a baking idea for a fundraiser. Day headed to Kansas City, and thus the greatest food ever known to humanity became . . . known to humanity. 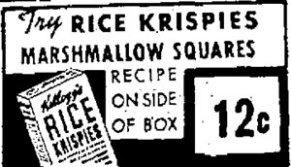 Kellogg’s did not sell premade treats until the 1990s, but that doesn’t mean Kellogg’s didn’t profit hugely from Day’s invention. They hawked the dickens out of the recipe from the beginning, offering the irresistible Krispie Treats as a primary selling point for the cereal. The recipe first appeared on boxes of Rice Krispies in 1941. Back in those days, cooking the magic confections at home was part of the charm.

Well, it was for most people. Day herself never made them for her daughter Sandra; Sandra didn’t even find out about Rice Krispie Treats until she was an adult. She asked her mother why (I mean, wouldn’t you?) and Day replied: “If you’d made them for two weeks from 6:30 in the morning until 10:30 at night, you wouldn’t want to make them again, either!”

For contributing the greatest treat, and therefore the greatest food, ever invented by human ingenuity, while making untold millions for Kellogg’s, I nominate Mildred Day for Al Copeland Humanitarian of the Year.

This entry was posted on Thursday, October 31st, 2019 at 10:34 am and is filed under Al Copeland Humanitarian Award. You can follow any responses to this entry through the RSS 2.0 feed. You can leave a response, or trackback from your own site.