Pass the Popcorn: That’s My Girl

This post contains mega major spoilers. I mean it. You have been warned.

Okay, let’s get the tiresome part out of the way first. Pass the Popcorn hereby presents:

EVERYTHING WRONG WITH INCREDIBLES II

What bugs me is not that these are huge problems, because they aren’t, but that they would have been so easy to fix if the studio had respected our intelligence just a wee bit more. I think these issues collectively made the difference between I2 being a really good movie (which it is) and a really great movie, on par with the original (which it isn’t, alas).

Whew! Now let’s get to the fun part.

I2 continues the Pixar/New Disney tradition of goring our cultural sacred cows, but doing it in just the right way so people will take it. In this case, as in some others (see: Frozen) it’s done by giving us a real encounter with the reason people believe in those sacred cows – the other side gets a full airing of its case before the movie pulls the rug out.

The Incredibles franchise, here as in the first movie, takes on two big cultural dimensions at once. Which is what would have made I2 a really great movie if they hadn’t fumbled too much of the small stuff, since taking on just one is tough enough.

The first dimension is the male ego. In the first movie this was simply (simply!) the conflict between Mr. Incredible’s longing for the glory days and the prosaic task of being a father. He must learn that parenting is heroic. “You are my greatest adventure, and I almost missed it!”

That theme is echoed in I2 by having Mr. Incredible become a full-time dad to three unruly kids with superpowers, the comedic value of which is expertly milked. And it leads, halfway or so through the movie, to the same conclusion – parents are the real heroes.

But now there is a new twist. The male ego comes up against the female ego. 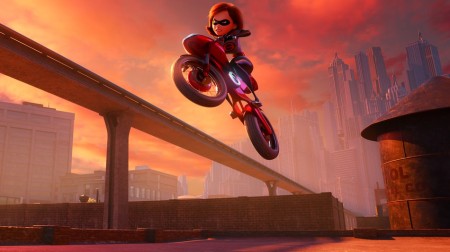 Mr. Incredible is not just invested in his own professional success – his glory days. Now he’s also deeply threatened by the possibility that his wife might outshine him.

All civilizations always needed to mortify the male ego sufficiently to make men into good fathers. But in the new social order that is emerging after feminism, the male ego must be further mortified to make room for female competition in the workplace – without the compensatory satisfaction of the paternal role being valued in the same way the maternal role is valued. Whether that is sustainable is an open question, but if it is, it will only be so if men learn heroic virtue similar to the heroic female virtue Tocqueville praised as the foundation of the American regime. Tocqueville said (in substance) that the American experiment in constitutional democracy avoids degeneration into atomistic indiviudalism only because its women had not demanded the equal rights to which they were clearly entitled under the governing principles of the regime; if they ever did demand those rights, he warned, the regime could not deny them, but the result would be the collapse of the traditions by which the family rather than the atomized indiviudal is the basic unit of society. That, in its way, is one of the lessons of I2 – only men of heroic moral virtue can sustain the new social order feminism has catalyzed.

You see what I mean about goring sacred cows? But we’re not done yet.

The female ego comes in for a subtle but no less sharp skewering in I2. From the moment they meet, Evelyn begins stroking Helen’s female ego – her sense of resentment and exclusion in a man’s world – in order to get under her defenses and take advantage of her. And Helen falls for it hook, line and sinker. The two of them spend half the movie just stroking each other’s female egos, right up to the point where Evelyn plunges in the knife. Like Iago worming his way into Othello’s trust by flattering his male ego and then twisting that very ego to his own purposes, Evelyn has used Helen’s feminist pride to destroy her.

The other big social topic is of course the role of superheroes. 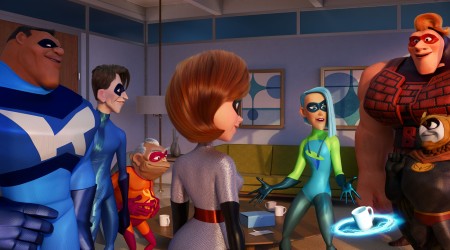 In the first movie, Syndrome spoke for the envy and resentment of all those who hate heroes – and they have been a prominent and influential voice throughout the modern period of history. So pervasive is this resentment that Helen herself parrots it without really thinking – “Everyone is special, Dash.” The modern period could almost be defined as the period during which it became plausible to say that it is evil to admire heroes.

I2 tries to pick that thread back up. In the Screenslaver speech, the critique of superheroes is even broadened into a critique of the Big Media and Internet culture for which superhero franchises are a sort of proxy. “You don’t talk, you watch talk shows; you don’t play games, you watch game shows.”

The makers of I2 have seen that under the surface of the standard-issue snobbery about mass media we constantly hear is an aristocratic (or worse) contempt for democracy and egalitarianism. Evelyn’s attack on bourgeois society strikes the note of every totalitarian ideology: You’re all SHALLOW and WEAK and LAZY. That’s why mass media is nothing but a tool of social control – you’re all so easily controlled because you’re pathetic and worthless. WAKE UP, SHEEPLE!

This is all botched, however, because it does not remain at the center of the villain’s character and motivation. The contrast with Syndrome is instructive. Syndrome has a personal trauma to provide resentment and a motive for megalomania, yes. But Syndrome’s revenge consists of remaking the world according to a new political vision, a vision whose principles he understands and articulates as a coherent ideology. This is precisely what makes him interesting. “When everyone is super, no one will be!” If Evelyn’s big “monologuing” scene with Helen in the frozen chamber had been a further elaboration of that political vision and not the recitation of a mind-numbingly boring series of convolutions designed to give her a stronger personal trauma, she could have ranked with the best of the Bond villains. 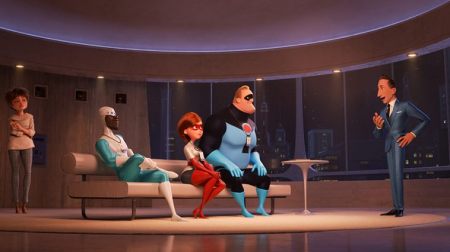 But in spite of this misfire, I2 does remember to pull the rug out from under Evelyn’s ideology. And the character who does it is Violet.

Let’s face it, there’s a great deal to be said for the critique of bourgeois society as shallow and morally undeveloped. But the bourgeois society is a little like Winston Churchill’s democracy – it’s the worst kind of society, except for all the others that have been tried from time to time.

The self-appointed superiors who look down upon the shallow complacency of bourgeois society never actually rise to moral heights. Time after time, in arrogance and contempt, they sink to moral depths.

Who is it that learns real humility? The supers, who – precisely because they have so much power – must learn to use it rightly or face catastrophe.

Violet spends the whole movie wanting to be a superhero. Even when she says she doesn’t, she only says it because she really does – and the sacrifices are so painful. And then, in the climactic moment, she chooses to stay out of the fray in order to protect her baby brother rather than seek glory and adventure.

And her father says, “that’s my girl.”

This entry was posted on Monday, July 2nd, 2018 at 2:13 pm and is filed under Pass the Popcorn. You can follow any responses to this entry through the RSS 2.0 feed. You can leave a response, or trackback from your own site.

2 Responses to Pass the Popcorn: That’s My Girl