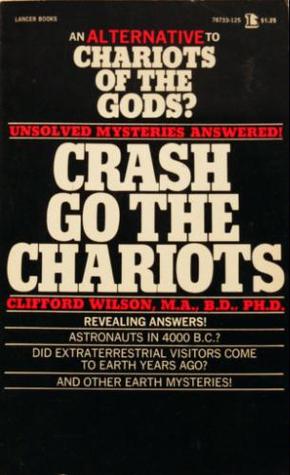 When I was a kid in the 1970s someone wrote a book about UFOs having visited earth in the past called Chariots of the Gods. The only thing I remember about this book was a photo of an ancient stone staircase and a caption that read “Staircase going down-to a spaceport?” Someone else wrote a book called “Crash Go the Chariots.” I never examined this book, but I imagine that it was a bit like shooting fish in a barrel.

I am in the midst of reading Jonathan Haidt’s The Righteous Mind: Why Good People are Divided by Politics and Religion and found the following passage quite striking. The book summarizes a great deal of psychological research to reach this point which I cannot do justice to, but roll with this in any case:

In the same way, each individual reasoner is really good at one thing: finding evidence to support the position that he or she already holds, usually for intuitive reasons. We should not expect individuals to produce good, open-minded, truth-seeking reasoning, particularly when self-interest or reputational concerns are in play.

Sounds dismal so far, but fortunately he goes on…

But if you put individuals together in the right way, such that some individuals can use their reasoning powers to disconfirm the claims of others, and all individuals feel some common bond or shared fate that allows them to interact civilly, you can create a group that ends up producing good reasoning as an emergent property of the social system. This is why it is so important to have intellectual and ideological diversity within any group or institution whose goal is to find truth (such as an intelligence agency or community of scientists) or to produce good public policy (such as a legislature or an advisory board).

Again, I can’t summarize the research that lead to this conclusion (read the book and see what you think) but basically Haidt lays out a case that says if you believe that you are some sort of scientist guided solely by sweet reason and evidence, you are the victim of self-delusion. Good reasoning happens through a social challenge process over time. 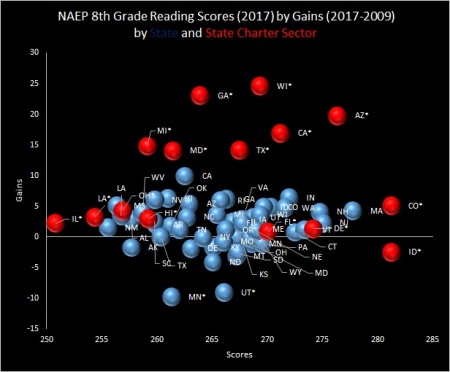 Do however take note of Louisiana’s charter sector position in the above chart. Now let’s look at the same chart for mathematics:

Again, there is a great deal to like here- multiple charter sectors with large gains (MI, WI, GA, MD, TX) or high scores (CO, ID) or both high scores and gains. Arizona, this one is for you:

Again however take a look at Louisiana’s charter sector-again low scores and low gains. A quick trip to the NAEP data explorer will demonstrate that this same trend is evident in 4th grade NAEP scores, and state scores have been trending in a negative fashion in recent years as well.

In recent years a school of thought arose in our space that a centralized authority or “harbor-master” could produce better outcomes by carefully controlling both the entrance and the exit of schools from charter sectors, primarily on the basis of standardized test scores. In the case of the Recovery School District in Louisiana, there was a period of strong gains in state test scores to buttress this belief. State test scores however have repeatedly shown themselves vulnerable to gaming and manipulation, especially when large consequences ride on them. Soviet steel makers reported non-stop prodigious growth in steel production for decades when facing such incentives as well. How much steel was actually made-who knows? Educators however have neither the incentive or ability to “teach to” or otherwise game the NAEP exams, which is why they have long stood as an external audit on state testing.

In this case, NAEP and state tests are both pointing in the same direction.

My preexisting belief, laid out previously on this blog, is that RSD was a very clever policy innovation for a district that at one point had little more than empty buildings to leverage. I’ve also however long suspected that the notion was over-hyped and ignored some very basic political realities. When for instance Denver announced that yeah, well, about that whole making facilities available thing, we’ve kind of discovered that we are a school district and that our dominant special interests don’t really like this idea after all. The reaction in my tribe was something along the lines of “duh- what did you think was going to happen?”

I’ll go further and say that RSD has a false allure for many of our technocratic friends: things can get better, but only if someone is in charge. Someone like me. True relinquishment means letting go: let operators develop new models, let parents respond to them, let the primordial soup bubble and bake. Don’t assume that you know what constitutes a “high quality education,” don’t aim a narrow vision of quality at a single type of community, allow the interplay of different choice programs to flourish.

Now, having fully confessed my preexisting beliefs, I have offered evidence that I believe confirms them. If someone has countervailing evidence to present, the comment section awaits your thoughtful challenge. If you buy into the harbor-master system, come and defend it.

This entry was posted on Monday, April 23rd, 2018 at 7:46 am and is filed under charter schools. You can follow any responses to this entry through the RSS 2.0 feed. You can leave a response, or trackback from your own site.

7 Responses to Crash Go the Harbormasters?