Derek Jeter for “The Higgy” 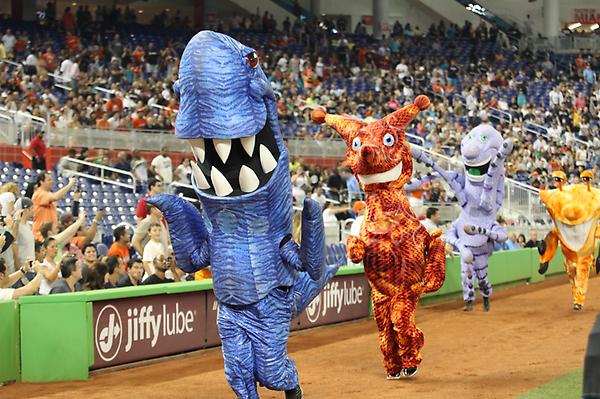 It was bad enough that Marlins fans had to suffer under previous team owner Jeff Loria’s inept management of the team (after impressively winning the World Series twice in the first ten years of the team’s existence).  And it’s even worse that a new ownership group led by former Yankee star, Derek Jeter, has dismantled what may have been the best outfield in baseball to conserve cash since the new owners seem financially exhausted immediately after having made the purchase. But the action that has significantly detracted from the human condition and made Jeter worthy of a nomination for the William Higinbotham Inhumanitarian Award is his decision to cancel The Great Sea Race.

Since 2012 the Marlins have held a race among mascots dressed in sea creature outfits during the 6th inning of home games.  This contest between Bob the Shark, Julio the Octopus, Angel the Stone Crab, and Spike the Sea Dragon, however, has come to a halt under the new ownership led by Jeter.  The exact reasons have not been given, but it appears that the new ownership group seems to view baseball as a serious enterprise, deserving of reverence.  As one commentator put it: “[Jeter] doesn’t want fans to have anything to smile about this year.”

The late, great Bill Veeck understood what baseball was really about — fun.  As owner of the Cleveland Indians, St. Louis Browns, and Chicago White Sox he packed the games with bread and circuses to make the experience entertaining.  He hired Max Patkin, the “Clown Price of Baseball,” to coach the Indians.  Patkin “had a face seemingly made of rubber that could make many shapes. He was rail thin and wore a baggy uniform with a question mark (?) on the back in place of a number, and a ballcap that was always askew. While some derided his act as corny, he became a beloved figure in baseball circles…”

In St. Louis, “some of Veeck’s most memorable publicity stunts occurred during his tenure with the Browns, including the appearance on August 19, 1951, by Eddie Gaedel, who stood 3 feet 7 inches tall and is the shortest person to appear in a Major League Baseball game. Veeck sent Gaedel to pinch hit in the bottom of the first of the game. Wearing elf like shoes and ‘1/8’ as his uniform number, Gaedel was walked on four straight pitches and then was pulled for a pinch runner.  Shortly afterwards ‘Grandstand Manager’s Day’ – involving Veeck, Connie Mack, and thousands of regular fans, enabled the crowd to vote on various in-game strategic decisions by holding up placards: the Browns won, 5–3, snapping a four-game losing streak.”

And in Chicago, Veeck was the first to introduce an electronic scoreboard that lit up, made noises, and shot fireworks when the White Sox hit a home run.  And in one of my greatest childhood memories, Veeck organized Disco Demolition Night, in which local DJ, Steve Dahl, dressed in a military uniform, drove a Jeep into center field, and blew up a pile of disco records during the middle of a double-header.  Dahl got the crowd so riled up that they stormed the field, causing enough damage that the White Sox had to forfeit the second game.  It was hilarious!  Veeck was also the one to convince Harry Caray, who was the announcer for the White Sox at that time, to sing “Take Me Out to the Ballgame” to the crowd during the 7th inning stretch.  Caray tried to refuse but Veeck said that he had a recording of Caray singing and would play it over the audio if Caray refused to perform it live.  Caray continued this practice of singing to the crowd when he moved to the Northside to become the announcer for the Cubs.  Thus was a much-loved baseball tradition born.

Veeck’s teams also played very well.  Under Veeck’s leadership, the Indians won their first pennant in 20 years in 1948.  In 1959, Veeck’s White Sox won their first pennant in 40 years. But Veeck understood that most teams fall short most years, so they have to offer their fans something other than victory to keep everyone entertained.  Yes, they should offer quality play, but sometimes even that is beyond the reach of most teams.  As we Marlins fans (can I use the plural for that?) wait for the team to rebuild with only moderate chances of being successful for many years, can’t we at least watch some frickin’ fish run around the outfield?

Jeter seems to represent the type of baseball fan who has watched Field of Dreams a few too many times.  The game is not a sacred ritual, deserving of church-like propriety.  It’s entertainment. It should be fun. For trying to make us all eat our baseball vegetables and taking away The Great Sea Race, Derek Jeter is worthy of The Higgy.

This entry was posted on Thursday, April 5th, 2018 at 1:43 pm and is filed under Uncategorized. You can follow any responses to this entry through the RSS 2.0 feed. You can leave a response, or trackback from your own site.

5 Responses to Derek Jeter for “The Higgy”