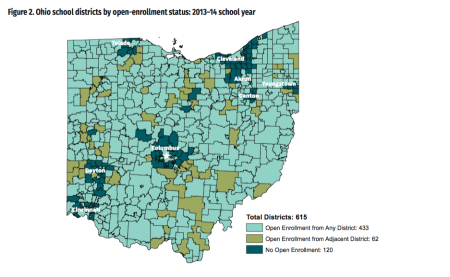 Now you will recall a similar map of Arizona, with districts not participating in open enrollment again marked in deep blue:

I believe that open enrollment is a big reason that Arizona has been leading the nation in NAEP gains, and that charter and private choice programs deserve some credit the eagerness with which districts participate. Take a look at Columbus on the above map- a large urban district literally surrounded by districts choosing not to allow open enrollment transfers. Now take a look at the school district map of Pima County. The Tucson Unified School District is surrounded by districts that do participate in open-enrollment- actively.

Tucson is a part of the nation’s second fastest growing state, but Tucson Unified has experienced a steady decline in enrollment. This is in part due to the rise of charter schools- as documented by the Center for Student Achievement:

Several of the districts in the chart above gained enrollment despite the increase in charter school enrollment-Queen Creek, Higley, Chandler and Phoenix Elementary. Notice also that these districts, which run a gamut between suburban and urban Arizona, all have growing charter school sectors.

Urban students in Arizona have the opportunity to attend suburban district schools, while their peers in Ohio (and much of the rest of the country) do not. We sadly do not as yet have district by district data on open-enrollment, but research by a Yale student put the figure at almost a third of district K-8 enrollment in Phoenix area districts had utilized open enrollment. We know for instance that Scottsdale Unified has 4,000 students attending through open enrollment. Anecdotally we know that several of the Tucson area school districts are also very active in open enrollment.

Arizona’s urban students have the opportunity to attend suburban schools, and Ohio’s urban students do not. This is primarily in my view because Arizona charter schools have helped open suburban seats, while Ohio’s choice programs have been overwhelmingly focused on urban students. So let’s check NAEP trends for large city students for all six exams for the entire period with state level data:

I’m confident I know what is going right for Arizona’s students in large cities: opportunity. They have the opportunity to attend their home district, suburban districts, charter schools (lots of them) and private schools. Tucson did not participate in TUDA, but does show positive trends in the state’s AZMerit data. Tucson’s enrollment is declining, but scores are improving and that is without factoring in the scores of kids attending suburban district schools, charter schools or private schools with scholarship assistance.

I’m not nearly as confident that I understand what is going wrong for urban students in Ohio, but this:

…is not working for them at all.

This entry was posted on Thursday, February 15th, 2018 at 6:43 am and is filed under NAEP, Open Enrollment. You can follow any responses to this entry through the RSS 2.0 feed. You can leave a response, or trackback from your own site.