Yours truly joins Marty West for the Ed Next Podcast on charter schools in the Wild West. My favorite bit is our discussion of Marty’s study using 2012 data showing meh results for Arizona charters. I’m confident that this result was accurate. In fact the 2013 NAEP also showed lower 8th grade scores in both Math and Reading for AZ charters than AZ districts. What gives?

In 2012 the Philadelphia Eagles went 4-12, but earlier this week they won the Superbowl. This doesn’t shock us much in sports as we understand that player turnover in sport is high and one year’s team can be very different from the previous year’s squad. Likewise in a charter sector as dynamic as Arizona’s you literally have had hundreds of charters open and close since 2012. Also during this period you had a large number of young schools mature (the survivors the crucible of their formative stage). The Great Recession was a period of rapid charter school growth in Arizona as many high quality CMOs seized the opportunity to obtain bargain priced properties. That also however meant lots of young schools going through their shakedown cruise periods.

If the Eagles had been playing a large number of rookies in 2012, their record would look bad, but come back a few years later and those former rookies have grown into grizzled vets. The guys who couldn’t cut it are off the squad. So too in 2015 Arizona charter students crushed the ball on all six NAEP exams, and their AZMerit scores have improved subsequently improved in both 2016 and 2017 along with the scores of districts. 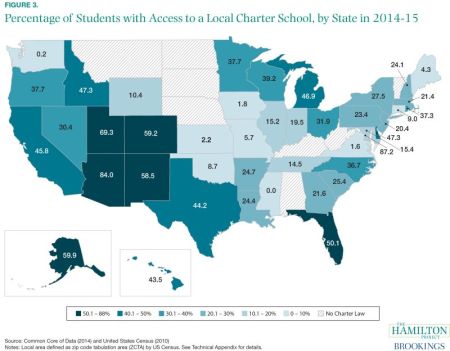 I wish I had seen the above Brookings map before writing the Ed Next piece, as it kind of sums up the four corner charter phenomenon in a nice visual. The higher percentage of kids that have access the charters, the more likely it is that your suburban districts will participate in open enrollment. We you have access to suburban (and/or private schools) your willingness as a parent to put up with a dysfunctional charter school moves closer to zero and they get very quick on the draw. Result: Yippie kai yay! 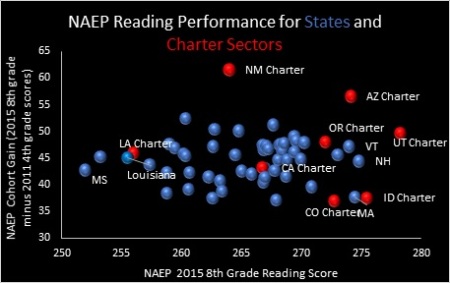 This entry was posted on Wednesday, February 7th, 2018 at 5:54 am and is filed under charter schools. You can follow any responses to this entry through the RSS 2.0 feed. You can leave a response, or trackback from your own site.