The furious reaction to an ad campaign by some Arizona business organizations raises a question that deserves more than a superficial ponder: Why is there such resistance, hostility even, to good news in Arizona, particularly about K-12 education?

Arizona schools are seriously underfunded compared to other states. Legions have made the leap, based upon this indisputable fact, that Arizona children are getting a lousy education compared to the kids in other states.

That has never really been the case.

According to the 2009 results from the National Assessment of Educational Progress test, the most reliable cross-state measure of student learning, Arizona kids, considered as a whole, did lag behind the national average.

When the 2015 NAEP results came out, Matt Ladner, senior research fellow at the Charles Koch Institute, made a startling discovery. Arizona students led the country in gains between 2009 and 2015.

This should be very big news. It should have catalyzed an intense discussion and inquiry about what was happening in Arizona classrooms that yielded such astonishing results, particularly during a period when the schools were on starvation rations when it came to resources.

Instead, these remarkable results have created barely a ripple in the discussion of K-12 education in Arizona.

Robb gives yours truly too much credit as there were others who noticed the Arizona gains earlier than me. I simply dug into the details and subgroups trends. In any case, Robb does an admirable job of describing the climate in Arizona. The dedication in some quarters to what seems to be an entirely self-defeating and irrational strategy is truly astounding.

The strategy strikes many of us as follows: how many entrepreneurs attempting to raise investment capital would make the argument that even vaguely sounds like “our product is HORRIBLE and you should be ASHAMED unless you give us more money. Buy our stock or you are a bad person!” How do we imagine such a strategy would work out?

“Everything is HORRIBLE!!!!” is a whip-up the base type strategy, but contributes to skepticism and ultimately defeat by poisoning the well with the public. In 2012, the districts put a tax measure on the ballot to support education, which failed almost 2-1 on election day. Then, as now, people were touting polls allegedly showing that the public supported the measure, but on election day the voters rejected it overwhelmingly. Proponents still grouse about the no campaign, but the no campaign won for a reason and in fact people on the yes side of the effort swear up and down that the support for the measure had begun falling before opponents launched their campaign.

The reason is simple: the public lacks confidence that increased spending will see the inside of a classroom. In other words they fear (rationally) that the money will simply be wasted. A non-stop narrative of “Everything is HORRRIBLE!!!!” is like the soundtrack to building public skepticism regarding sending good money after bad in AZ K-12.

Robb notes in his column that district supporters fear that drawing attention to Arizona’s nation leading gains may undermine the case for additional revenue, allowing some to make the case that current funding levels are “good enough.” I however believe that the opposite is true- instead of the self-defeating misguided pitch above, what if the pitch became “Arizona has the fastest improving public education achievement scores in the nation. We are asking for your increased support in order to accelerate our momentum in providing our students the knowledge, skills and character necessary for success in life.” Imo:

I’m content to let this whole democracy thing work itself out on the question of funding. Arizona has lots of old people and large average family sizes. The states just above and below us on the funding rankings are Idaho and Utah, respectively. Hmmm…what do those states have in common? Here’s one:

Arizona (and Idaho and Utah) have large average family sizes and we should not want or expect this to change. Arizona has lots of retirees living on fixed incomes anxious to vote every election- and this is increasing. Arizona has no oil gushers or hedge fund billionaire clusters paying sky high income taxes. Add on top of that a self-defeating trash-my-own product fundraising strategy reinforcing a notion on the part of the public that Arizona schools could not find their posterior with both hands and a map. Call me nuts, but disabusing the people of this latter notion, rather than reinforcing it, is helpful rather than harmful to the case for increased funding.

Arizona is never, and I mean EVER going to win a spending per pupil contest, but some cards could be played much better. Instead of winning a spending contest, we have been winning a bang for the education buck contest and leading the nation in academic gains. I’ll eventually once again become one of the millions of voters on a statewide funding vote. So far I am batting a thousand as far as landing on the winning side, but my vote is very unlikely to be decisive. If funding were driving results, we would not be seeing trends like this: 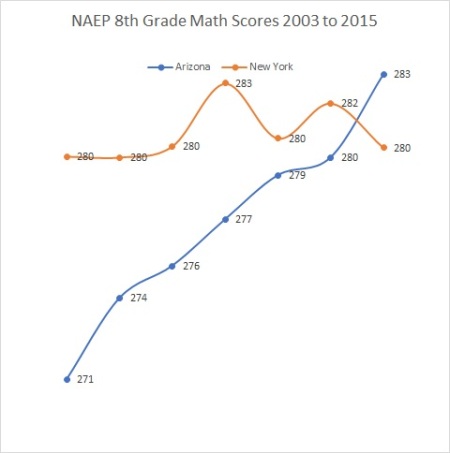 So cheer up Arizona- we’ll eventually put the 2018 elections behind us and while the capacity of the school crowd to pull defeat from the jaws of victory is strong, at least the Arizona business community seems to have embraced a positive path forward. Oh and also there is a whole lot to be happy about in improving faster than any state, especially if we can keep it up.

This entry was posted on Tuesday, January 30th, 2018 at 8:50 am and is filed under Uncategorized. You can follow any responses to this entry through the RSS 2.0 feed. You can leave a response, or trackback from your own site.