I, ah, have yet to receive anything approaching a coherent response. So I thought I would create a little visual on seat creation. The below chart shows charter schools opening in NACSA’s second rated state (NV) and also Arizona (which had a 9/33 score for most of this period) for the period Nevada has had charter schools (Arizona got a five-year head start). Just to practice my chart making skills, I inserted the flags of each state as the chart filler. 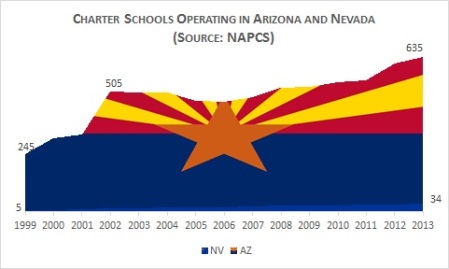 What is that you say? No Nevada is in there– it is just a little hard to spot. See that slightly different color blue smidge at the bottom of the Arizona flag? That is the Nevada flag. Here-let me give you a better look: 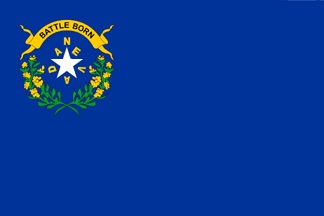 I think you have a good idea of what the Arizona flag looks like. This is similar to the NAEP data explorer not being able to give us academic scores for charter school students in Nevada because, well, like the visual the sector is just too small. In fact, when you examine NACSA’s top 10 ranked charter school laws, the list correlates strongly with small sectors, weakly with impressive results.

I want to make sure that my friends in the Silver State understand that I do not want to be understood to be critical of their efforts-I want nothing but the best for Nevada charters. Rather I want to not set the bar too low on defining charter school success, nor to misunderstand what actual success in charter schooling looks like. Hint: success looks a lot like Arizona and Colorado.

This entry was posted on Wednesday, April 5th, 2017 at 6:55 am and is filed under charter schools. You can follow any responses to this entry through the RSS 2.0 feed. You can leave a response, or trackback from your own site.