The Agony and the Ecstasy of the Nevada ESA Ruling

I’ve read a few school choice related Supreme Court decisions over the years, but I’ve never seen anything quite like the ruling that the Nevada Supreme Court made yesterday. To this untrained reader, it appears to be a determined exercise in cutting the baby.

The decision reads very cleanly until the matter of standing arises. Standing involves being able to demonstrate some personal harm, and the Court implicitly acknowledges a lack of harm on the part of the plaintiffs by creating an exception to standing out of whole clothe in the ruling:

So…..I am inferring from this that under the standing requirements that existed for every previous case in the history of the state of Nevada, that the Nevada Supreme Court would have felt compelled to acknowledge the obvious truth that the plaintiffs had claimed harm when in fact none actually existed. I’m no lawyer, and I don’t play one on television, but I’m also astonished that the Court felt free to willy-nilly change standing requirements unilaterally and in the late stages of an important case.  If you can explain to me how this makes the least bit of sense, and it not entirely arbitrary and capricious, please feel free to educate me in the comments.

Having performed this incredibly one sided act of mental gymnastics, the court moves on to consideration of constitutional issues. First up, our old friend the “uniformity clause.” Quite rightly, the Court squashes this bug of a claim under their boot: 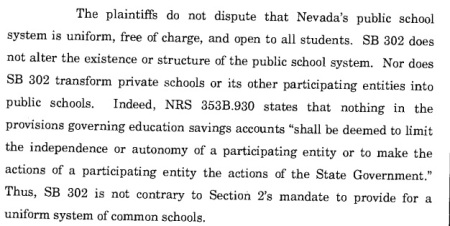 Jolly good, moving on to sectarian purpose Blaine claim. This is where the Court makes a potentially very far-reaching conclusion: 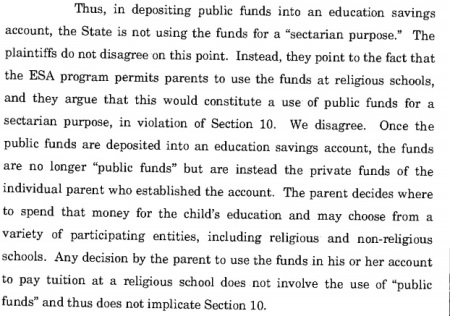 Note that this was an argument that Nick Dranias and I made in our paper for the Goldwater Institute that made the case for the Arizona ESA as a replacement for the voucher program for children with disabilities: that once a set of mutual benefits between a parent and the state had been realized that funds deposited into an account were private rather than public funds. Jason does a great job of expounding on this point in his Cato post on the decision and how this precedent is followed in other policy areas. No one can claim that a state worker cannot use their salary to pay for Catholic school tuition for instance- as the check from the state is exchanged for the labor of the worker and thus becomes private funds. Likewise in an ESA, the state realizes the benefit of paying for a traditional education for the child, and the parent realizes the benefit of flexibility under the rules of the account.

The Arizona ESA decision implicitly recognized this argument, but the Nevada decision explicitly embraces it.

After that we get back into agony, with the court sifting through a complex mess of requirements and dates of bills passing. Basically in the end the court emphatically holds that ESAs are constitutional, but finds that the way the legislature funded the ESA program was itself not constitutional. Basically the program exists but currently has no funding.

So where does this leave things?  It leaves the 7,000+ students who applied for NVESA out in the cold. As the Wall Street Journal noted today, a looming special session on building a football stadium for an out of state billionaire also represents an opportunity to fund the educations of thousands of Nevada children.

Let’s see what happens next.

This entry was posted on Friday, September 30th, 2016 at 11:04 am and is filed under Education Savings Accounts. You can follow any responses to this entry through the RSS 2.0 feed. You can leave a response, or trackback from your own site.