I was examining data on charter school closures in Arizona between the years 2000 and 2013, and noticed a pattern in the data. The vast majority of schools on the closure list did not operate very long and tended to be very light on enrollment in the last year they operated.  I averaged the available data and found that the average closed school had operated four years, and had an average of 62 students enrolled in their final year of operation.

Mind you that Arizona’s charter law grants 15 year charters, and that something unusual would need to occur in order to have authorities intervene before such time.

So a couple of notes before discussing the main implication since Arizona grants 15 year charters, the first of them would not have come up for renewal until 2010 or so, and it would have been a bit of a trickle at first. Currently however you’ll have a group of schools up for 15 year renewals every year.  The data examined above end around 2013, and has missing data.

The state publishes a list of school closures, and if you examine it, you’ll see a large number of “voluntarily surrendered” or “problems with facility” type explanations, very few “charter revoked.” This leaves a lot of grey area whereby schools give up the ghost perhaps to save themselves the embarrassment of not being renewed- like this charter set up by the University of Arizona College of Education that closed in 2013- but with it also being possible that other factors were going to sink them regardless. The official “charter revoked” explanation almost certainly understates the current role of the authorizing board imo.

Now, back to the heart of things- Arizona parents seem extremely adept at putting down charter schools with extreme prejudice. Arizona parents detonate far more schools on the launching pad compared to the number we see bumbling ineffectively through the term of their charter to be shut by authorities (or to give up the ghost in year 14 in an ambiguous fashion). Both of these things happen, but the former happens with much greater regularity than the latter. Having a vibrant system of open enrollment, charter schools and some private school choice means that Arizona parents can take the view that life is too short have your child enrolled in an ineffective institution. States have different circumstances and different political cultures. The circumstances in Arizona when the charter law passed in 1994 involved a crushing level of enrollment growth and a district system with a very low level of average performance. No one was going to want to adopt hyper-cautious authorizing when the state was bankrupting itself to build new (usually low performing) district facilities.  “Educators are willing to open new K-12 spaces without facility funding and they shut down if they don’t cut it? Hand me the dice!” said everyone in Arizona with any sense in 1994.

By the way- Darwinian competition can work wonders academically over time: 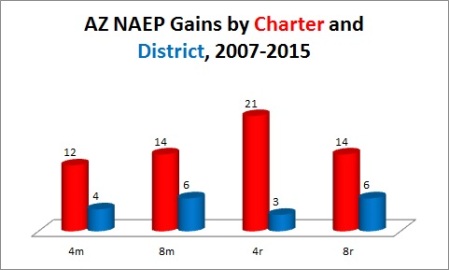 Open lots of new schools, let parents put them down, if and when a school you think is a stinker survives the wrath of the parents you can not renew the charter if you have that sort of confidence in your own judgement being superior to that of the parents (careful with that).  If you feel a compulsion to intervene best to do it on the back-end in my view, as it seems like getting large numbers of new schools to start represents a key to success.  I fully agree with Jay’s reasons for trepidation on such a substitution, but also can’t embrace throwing renewals (which are for 20 years in Arizona) around like:

I’ll try to look at the success and/or failure of the parents in other states in closing charters in the future.

This entry was posted on Friday, August 12th, 2016 at 9:00 am and is filed under charter schools. You can follow any responses to this entry through the RSS 2.0 feed. You can leave a response, or trackback from your own site.