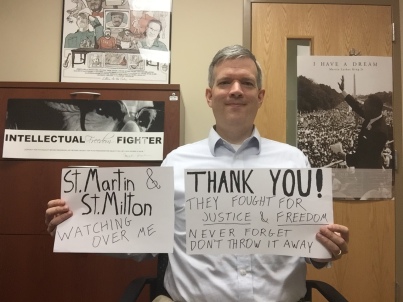 Milton turns 104 this weekend. Above is the tribute I contributed to the Friedman Foundation’s photo series. We should, indeed, never forget.

When he came on the scene, half the world was in slavery to totalitarian socialism, and he made a material contribution to their liberation. Here at home, both parties were deeply committed to statism, and he rightly advised the friends of freedom not to spend most of their time trying to elect the “right” side. He emphasized that all politicians are powerfully affected by self-interest while in office, so instead of trying to elect people who say they support freedom, we should work to change incentives for officeholders so it will be in their interest to support freedom. “Don’t change the players, change the game,” he wisely said. Words to remember.

I was honored to work for Milton in the last years of his life. I admired that he was so eager to help other people learn. One way you could see this was that he was always asking people questions – questions intended to help them notice their blind spots and become aware of internal contraditions in their thinking. He never talked “at” anyone. He asked you what you thought, in a way that made you think. That’s another thing we’d be wise to remember.

If you’re near Indy, join my Friedman friends for the main event. I’ll be spending the evening tonight with the Wisconsin chapter of Americans for Prosperity, saying a few words about Milton’s legacy – and of course school choice.

However alarming things may be now, let’s remember that the danger to freedom was even worse in his time. Yet he didn’t lose hope that people could be enlightened and persuaded. And he didn’t let personal or factional hostility take over what was supposed to be a debate about ideas. Let’s carry that legacy forward, whatever comes!

This entry was posted on Friday, July 29th, 2016 at 8:33 am and is filed under Uncategorized. You can follow any responses to this entry through the RSS 2.0 feed. You can leave a response, or trackback from your own site.