Yesterday, Jay took apart the factually challenged hit piece the Gray Lady ran on charter schools in Detroit. Matt added his two cents and I piled on as well. Additionally, Tom Gantert of the Mackinac Center for Public Policy identified another dozen or so errors, distortions, or omissions of key facts.

But the most illuminating part of this whole imbroglio was the following Twitter exchange with the NYT reporter:

Jay and others, including Prof. Martin West of Harvard, explained how the article misrepresented the findings of CREDO’s research on charter schools. The NYT reporter, Kate Zernike, defended her piece by noting that she contacted CREDO about the charter she highlighted, which CREDO had found to be low performing. However, Jay pointed out that she cherry-picked that one bad charter and failed to note that CREDO found overall positive results.

Zernike  apparently forgot the First Law of Holes: when you find yourself in one, stop digging.

Jay also took her to task for relying only on “claims and anecdotes” instead of data, so she cited data from Excellent Schools Detroit. 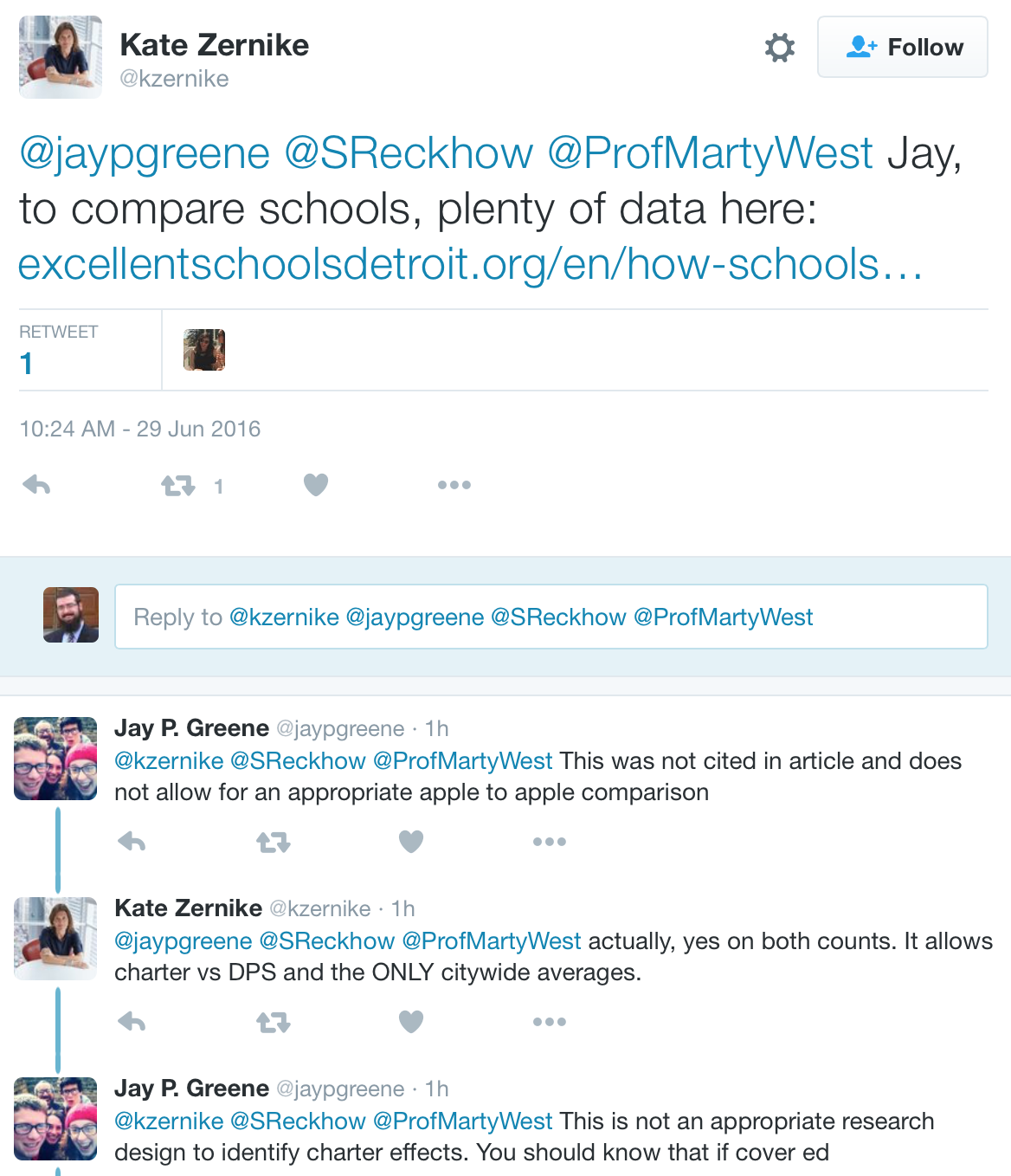 However, as Jay explained, those data do not allow for direct comparisons. Zernike is right that the data show the citywide averages in each sector, but looking at the averages is misleading. Zernike seemed to think Jay was objecting to the standardized tests, but the real problem he identified was not the tests themselves but rather how she tried to compare the students taking those tests.

The charter schools tend to be mission-based schools that open in the toughest areas and serve the most at-risk students. Comparing city-wide averages fails to take that into account. It would be like comparing the New England Patriots against a championship high school team and concluding that the teenagers are superior athletes because they scored more touchdowns per game.

The appropriate comparison is between the charters and the district schools that serve the same or similar student populations. That is what the CREDO study attempted to do by matching students with similar characteristics and initial test scores in each sector, then tracking and comparing them.

Amazingly, Zernike then claimed that CREDO did not find that Detroit charters had a positive effect overall. In fact, that’s exactly what CREDO found in both its 2013 report on charters in Michigan and its 2015 nationwide charter report.

As Matt noted, the 2013 CREDO study on Michigan found: “on average, charter students in Michigan gain an additional two months of learning in reading and math over their [traditional public school] counterparts. The charter students in Detroit gain over three months per year more than their counterparts at traditional public schools.” [emphasis added]

Nevertheless, Zernike persisted in claiming that CREDO found results that it didn’t find.

That’s right. Zernike says CREDO “does not consider Detroit stellar” — but page 33 of the 2015 CREDO report calls Detroit’s charter sector “a model to other communities.” See for yourself:

“models to other communities”

But apparently some reporters don’t like it when people point out that what they wrote is factually incorrect. Here was her response to my Tweet correcting her:

If the New York Times has any integrity, it will issue a correction.

This entry was posted on Thursday, June 30th, 2016 at 10:25 am and is filed under Uncategorized. You can follow any responses to this entry through the RSS 2.0 feed. You can leave a response, or trackback from your own site.