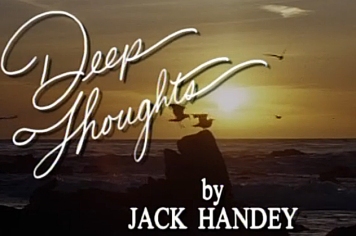 Every now and then, Thomas Sowell writes a column titled “Random Thoughts on the Passing Scene” where he offers up gems like this:

Stupid people can cause problems, but it usually takes brilliant people to create a real catastrophe.

I’m no Thomas Sowell, but here are a few of my own (much less pithy or clever) random thoughts the passing education policy scene:

Last October, the Montana Department of Revenue interpreted the state’s constitution to prohibit it from issuing tax-credit scholarships to students attending religious schools. Fortunately, a judge ordered them to reverse course after the heroes at the Institute for Justice — which deserves its title as the “nation’s pre-eminent courtroom defender of school choice” — filed suit. The injunction is only temporary, pending the outcome of the case, but the MT-DOR bureaucrats just filed an appeal. Can’t let parents get a taste of choice! Why, they might choose something else!

Sadly, they’re far from the only ones working to block educational choice…

Lawsuits against two of the most ambitious educational choice policies are each one step closer to resolution. In Florida, the teachers’ union (joined by the NAACP and others) is challenging the state’s tax-credit scholarship program, which served nearly 70,000 low-income students. A lower court tossed out the challenge based on standing but the union appealed. Earlier this week, an appeals court heard oral arguments in the case, where the union’s attorney struggled to explain how the choice law harms anyone:

Lynn Hearn, arguing for the groups challenging the program, said students receiving scholarships are spread unevenly across the state. The program affects public schools “by drawing students out of the system and sending the funding away,” she said, and schools don’t always reap savings from having fewer children to educate.

“You’ll have a few from this school and a few from that school, and so the school is left with exactly the same expenses,” she said.

Judge Lori Rowe, part of a three-judge panel that heard the case, was skeptical.

Meanwhile, the Nevada Supreme Court is preparing to hear oral arguments in a lawsuit challenging the state’s education savings account law. Last month, the attorney general’s office “formally nudged” a judge to rule on a separate challenge by the ACLU that was filed back in August. There’s a decent chance that the state supreme court will merge the two cases.

Why is the left so determined to keep families from exercising choice? In short, it’s about control. And that leads me to…

It’s frankly incredible that with all the serious problems this country is facing, the president thinks it’s a priority to issue a decree forcing public schools to let children pick which bathroom–or locker room–they want to use. Yes, that’s right, the feds have ordered public schools to give biological males access to the girls’ locker room, where teenage girls undress and shower. The White House press secretary, the Orwellianly named Josh Earnest, claims that the new decree is only “guidance” not a “threat,” but if schools don’t follow the “guidance” then the Obama administration promises to cut their federal funding.

Late last year, the feds intervened when a public school in Illinois required a transgender student who is biologically male to “change and shower separately from her teammates and classmates.” Rather than force the student to use the boys’ locker room, the school came to a compromise that attempted to respect the privacy of all the students involved. Nevertheless, the feds filed suit, demanding the transgender student receive “unfettered access” to the girls’ locker room, even though some teenage girls expressed discomfort undressing and showering with someone who is anatomically male. Eventually, the school caved. Outraged parents have filed a lawsuit seeking to overturn the school’s agreement with the feds, and this week the ACLU announced it was intervening to support the feds.

As Neal McCluskey (my wise and benevolent boss at the Cato Institute) often observes, the zero-sum nature of political control over schooling forces citizens into social conflicts like the Bathroom Wars. A much less divisive alternative would be (you guessed it!) a system of educational choice in which parents could select the schools that have their preferred bathroom policy:

As important, if not more so, is that allowing private entities to choose their own policies is consistent with individual liberty, including freedom of association and religion, while it is much better suited to enabling people with competing values to peacefully co-exist. There is no zero-sum contest: Those who want an open bathroom policy could choose schools in which all the staff and families also embraced it, while those feeling more comfortable with bathrooms and locker rooms restricted by biological sex could go to schools with like-minded people.

Perhaps the best examples of educational choice helping to bring peace and balance rights have been in many European countries, where religious conflicts in schools abated as governments decided to fund choices of Protestant, Catholic, nonsectarian, or other institutions. Getting to the place of greater peace requires something difficult – accepting that all people should be able to live as they want as long as they do not force themselves on others, and even if we do not like the choices they make – but living and letting live is the foundation of a free society.

The results show that single-sex education can improve both boys’ and girls’ outcomes. Three years after being assigned to a single-sex secondary school, both boys and girls have higher scores on standardized tests. Five years later, they are more likely to take and pass advanced courses. In the long run, both boys and girls are more likely to have completed secondary school and to have earned the credential required to continue to tertiary education. Importantly, boys are also less likely to have been arrested. Taken as a whole, the results suggest that being in the single-sex cohorts improved test scores and also improved longer-run non test score outcomes such as advanced course taking, high school completion and engaging in criminal activity.

As AEI’s Michael Strain highlighted, “the benefits of single-sex instruction are free to the taxpayer — all you have to do is sort children into the appropriate classrooms or schools.”

You won’t be surprised to learn that, evidence be damned, the ACLU opposes this as well.

This entry was posted on Friday, May 13th, 2016 at 6:12 pm and is filed under Uncategorized. You can follow any responses to this entry through the RSS 2.0 feed. You can leave a response, or trackback from your own site.

One Response to Random Thoughts on the Passing Ed Policy Scene