Why Relinquishment Would be a Good but Insufficient Idea for DCPS

Andy Smarick has written about the next phase of reform for DC, calling for a relinquishment model. Given that DC charters receive a lot less revenue per pupil than DCPS and get substantially better results, this idea has merit. 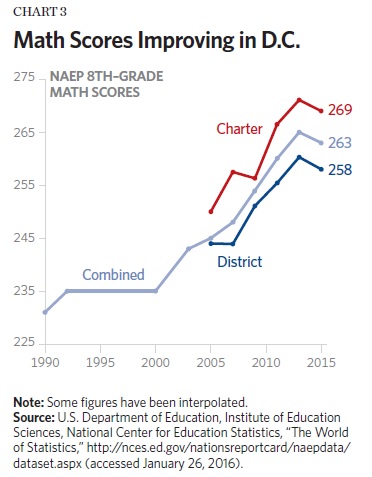 So scoring about a grade level worth of average progress higher for considerably less money constitutes an impressive accomplishment. However when we rank both DCPS and DC charters against the other urban districts in TUDA (for students with parents having similar education backgrounds) we find: 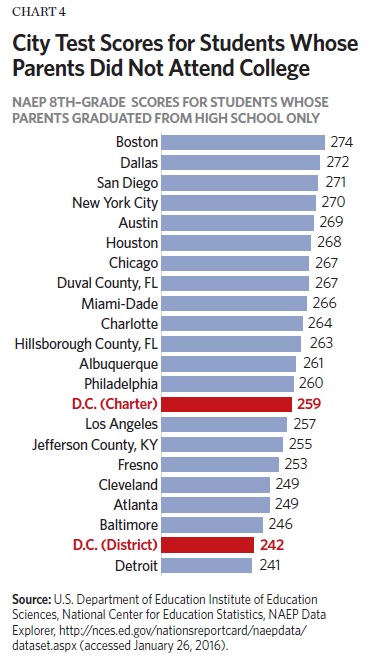 The same pattern appears if you slice by family income etc. Not only to DC charters have a clear advantage over DCPS- they also demonstrate the only impressive gains for free and reduced lunch eligible students to be found in the NAEP data. Don’t go diving too far into the punch bowl however because those overall scores, even for charter students, are still trying to catch up to Mississippi:

So- I agree with Andy that DC policymakers should consider pursuing an achievement district type strategy. DC policymakers and students should not turn their noses up at any strategy with a clear theory of action for improving outcomes at a lower cost. It’s not as if $29k per child in revenue will last a lifetime, but these terrible DCPS results will.

The data however seem to strongly suggest the approximate limits of such a strategy. We have no evidence as yet for instance suggesting that DC charter schools can produce a 20 percent boost in graduation rates the way DC OSP managed. Moreover, the status quo in DC is heading straight towards the extinction of private schools rather than utilizing their potential as partners. An achievement district approach would not have to finish this sad job as it looks likely to be finished long before.

DCPS has lost half of its students. It receives an unsustainable amount of revenue per pupil and does very little with it.  The appearance of improvement in the first figure above is mostly a mirage driven by gentrification. That same gentrification has helped to make DC the achievement gap capital of the nation as the one thing that DCPS has seemed to master is educating kids born on third base. Even if one mistakenly takes DC gains at face value, it still leaves DC ranked near the bottom as seen in the second figure and chart above.

As a resident of a distant patch of cactus, I don’t get a vote on any of this. DC residents will ultimately work this out for themselves. Call me crazy-it’s been too long since anyone has- but I would not be looking for incremental change.

This entry was posted on Monday, March 7th, 2016 at 7:53 am and is filed under Education Savings Accounts. You can follow any responses to this entry through the RSS 2.0 feed. You can leave a response, or trackback from your own site.