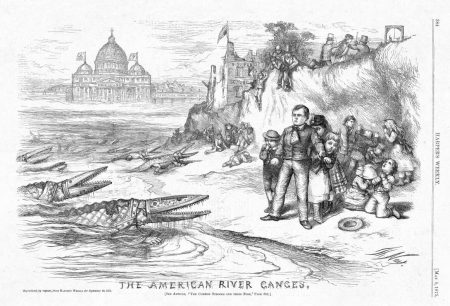 [H]ostility to aid to pervasively sectarian schools has a shameful pedigree that we do not hesitate to disavow. […] Opposition to aid to “sectarian” schools acquired prominence in the 1870’s with Congress’s consideration (and near passage) of the Blaine Amendment, which would have amended the Constitution to bar any aid to sectarian institutions. Consideration of the amendment arose at a time of pervasive hostility to the Catholic Church and to Catholics in general, and it was an open secret that “sectarian” was code for “Catholic.” […] Notwithstanding its history, of course, “sectarian” could, on its face, describe the school of any religious sect, but the Court eliminated this possibility of confusion when […] it coined the term “pervasively sectarian”–a term which, at that time, could be applied almost exclusively to Catholic parochial schools and which even today’s dissent exemplifies chiefly by reference to such schools. […]

In short, nothing in the Establishment Clause requires the exclusion of pervasively sectarian schools from otherwise permissible aid programs, and other doctrines of this Court bar it. This doctrine, born of bigotry, should be buried now.

Sadly, it is far from buried. Some opponents of greater parental choice in education still find religious bigotry to be a useful tool in pushing their agenda. Consider the following excerpt from this (factually challenged) letter to the editor from Charles Sumner, president of the Nashville chapter of Americans United for Separation of Church and State:

After the Memorial and Remonstrance against Religious Assessments was circulated in Virginia by Madison and Jefferson, our nation decided we would never again send tax money to religious groups.

When I asked the principal of a Nashville Muslim school, I was told they would accept vouchers. However, most mainline religious groups are not known for having schools.

What an interesting choice of religious affiliation to cite as an example. Perhaps Donald Trump suggested it? And how helpful of Mr. Sumner to note that Islam is not “mainline”! [wink wink, nudge nudge] Apparently neither are the Catholics, since “mainline” religious groups apparently send their kids to the government-run schools, like they’re supposed to.

Although we disagree over school choice, Americans United has admirably defended religious minorities like Muslims when they experience persecution. Do the higher ups at Americans United know that a chapter president is not-so-subtly exploiting anti-Muslim bigotry for political ends? And what do they intend to do about it?

I highly doubt that the Americans United executives are themselves bigoted, but it’s worth noting that their reasons for opposing school choice today closely resemble those of the anti-Catholic bigots a century ago. When Catholics asked for public funding of their schools just as the Protestants received for theirs (i.e., the supposedly “public” schools), the Protestant establishment responded that the Catholics certainly had the right to open their own schools, but that they shouldn’t expect public funding because their schools were “sectarian” whereas the public schools were open to everyone.

Of course, that was true only in theory. In practice, the public schools reflected the views of the, shall we say, mainline religious groups, so Catholics had to choose between sending their children to schools that taught beliefs contrary to their own or opening their own schools.

When what is taught is schools is decided through a political process, there will be winners and losers. Politics is a zero-sum game. At best, the majority will have their views reflected in the schools and minorities will not. At worst, a well-organized minority will impose its will over even the majority. But even in the best case scenario, minorities like Catholics, Muslims, Jedi, etc. lose out:

Let’s consider an imaginary “public” school district where there are three groups of people: Hobbits, Ewoks, and Terrans. Each groups has very different and passionately held views about what should be taught in school and how it should be taught. All three groups are required to pay taxes to support the district school, which is ostensibly nonpartisan, nondenominational, and open to all. However, the majority of the district is Terran so the school reflects the Terran preferences. When the Hobbits and Ewoks open their own schools and seek equal per-pupil support from the local government, the indignant Terrans respond that the district school is meant for everyone. “It’s your right to open your own schools,” explain the Terrans, “but it’s your responsibility to pay for them.” Thus the majority brazenly forces minority groups either to abandon their values or to pay for two school systems. And lower-income minorities may have no choice at all.

A system of school choice, by contrast, enables minority groups to enroll their children in schools that align with their values without placing upon them the burden of supporting two school systems.

At the very least, Americans United should repudiate Mr. Sumner’s comments and take appropriate disciplinary action. Better yet, they should rethink their approach to education in a pluralistic society.

This entry was posted on Monday, December 21st, 2015 at 4:04 pm and is filed under Uncategorized. You can follow any responses to this entry through the RSS 2.0 feed. You can leave a response, or trackback from your own site.

One Response to Bigotry vs. School Choice