Pass the Popcorn: The Wind Rises 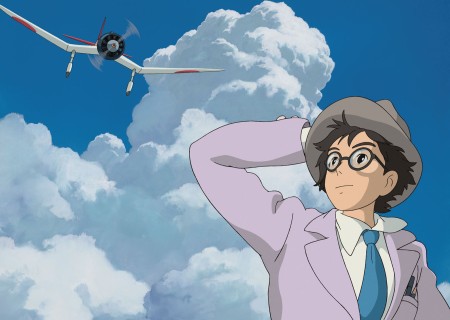 I hadn’t intended to time a review of Hayao Miyazaki’s final film, The Wind Rises, for the 70th anniversary of the dropping of the atomic bomb. But it turns out to be perfect timing.

Every scene of this movie is visually gorgeous, sometimes in a reserved way but often strikingly so. It is a fitting consummation of Miyazaki’s mastery of his medium. But it seems at first a radical break in content. It is the only Miyazaki movie that takes place in the real world – well, more or less the real world. He introduces a few fantastical elements, but they are limited to dreams and visions, and of course the somewhat fantastic aeronautical physics for which Miyazaki is so famous. When the characters are awake, they are living in the real world. The closest Miyazaki has ever come to the real world before was in his first film, Lupin III, and that hardly counts, both because its genre conventions take us well beyond the boundaries of the “real” world and because Miyazaki was forced to work within another author’s established universe. As soon as Miyazaki gained the freedom to make his own movies he leapt into the world of magical fantasy and never looked back – until now.

Update: Just watched Nausicaa with my daughter (her first time) and it made me realize in the paragraph above I forgot about Nausicaa, which is fantastical sci-fi and thus not “realistic,” but contains no magical realism as such. Even the aeronautical physics are not all that far off from reality! Fascinating to reflect upon Miyazaki’s career arc!

This is also his only movie that is concerned with real historical events. It is a heavily fictionalized account of the life of Jiro Horikoshi, who invented the Zero fighter plane and helped transform Japan from a comparatively primitive backwater into a global technology power. After the final scene fades, a title card appears informing us that the movie is a “tribute” to Jiro and to Tatsuo Hori, who wrote a short story from which this movie gets its title and from which it borrows core elements of its love story. 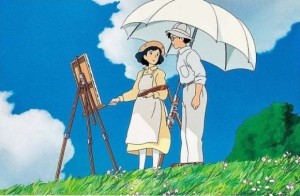 On a deeper level, it is almost his only movie where the real drama is in the writ-small world of one person. There are no epic quests here, no dispossessed princesses with magic amulets or gods warring to destroy humanity. Kiki’s Delivery Service comes close to this, but even Kiki discovers the meaning of her gift when she finds that she can use it to intervene in a major event. To find a movie as personal as this one in Miyazaki’s corpus, one in which no great fate rests in the balance of our hero’s actions, we must go all the way back to Totoro. But the Wind Rises goes even further than Totoro; here, our inability to change the really great historical events is actually central to the movie’s message.

Now I’m going to say something that may seem to contradict what I’ve just said. This is, at long last, Miyazaki’s political movie. Many of his works have had political themes; Miyazaki is well known as an environmentalist, a pacifist, and a former Marxist. But none of his previous movies was really a movie about those things. Only the shallow environmentalists think Princess Mononoke or Ponyo is really about environmentalism. Only the shallow pacifists think Howl’s Moving Castle is really about pacifism. Meanwhile, this movie – this highly personal movie that is all about one man, a man who knew he couldn’t stop war and therefore didn’t try – is the really pacifist movie.

Okay, I’ve made this movie sound like a tangled mess. It isn’t. It’s quiet and still. The point only becomes confused when you attempt to express it in words rather than simply showing it in a story.

The whole point of the movie is to ask the great political question – what role does politics play in the meaning of human life? –  and give an answer that we Americans have always rejected with repugnance but which the whole rest of the world has always taken quite seriously, even when it disagrees with it. It is simply this: that it is a deadly mistake to look to our nations for justice, for they never deliver; but it is possible to look to our nations for identity and for opportunities to serve the world around us. 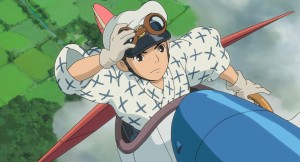 It would be flippant to say that the real message of this movie is “the men who built the horrible Japanese war machine were people too!” But that does come close to expressing it.

Our dreams are cursed. If we build our dreams, the things we build will be used for evil and destruction. Should we therefore not build? Give up dreaming? As one character puts it, “would you rather live in a world without pyramids?”

Jiro wants to build airplanes. He dreams of marvelous airplanes, far greater than any that have ever been built before. And the only way to build those dreams is to build warplanes for the military.

But here’s the catch. Jiro doesn’t only want to build better planes because they’re worth building in themselves. He also wants to serve his country – not the war machine, which is unambiguously horrible, but his people. They live in poverty and want. Hungry children are all around him. Japan is so backward that they use oxen to drag the prototype planes from the hangar to the test field.

Jiro knows that he and his team of builders can help catapult Japan out of the economic ghetto. They can feed the hungry children of Japan by building planes – planes that will be used to bomb the children of China.

The idea that Jiro could go build beautiful planes for some other country is not even considered. First, because all countries are viewed as monstrous. How much better would it be to make planes for China, or any other nation? If they’re not the aggressor now, they will be someday. But there is also a sense of duty to one’s own country. Jiro feels responsible to the people of Japan. We cannot escape who we are and where we come from. 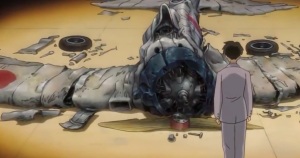 The pacifist nationalism of The Wind Rises ultimately fails to persuade; at least, it didn’t persuade this American. Like most Americans, I think the nation must be made to deliver justice. You can’t remove justice from the political sphere; to put it another way, no matter how beautiful your planes are, it matters whom you make them for. Despite this film’s best efforts – and they are impressive – one cannot escape, or at least I cannot escape, the feeling that Jiro is fleeing from responsibility. Refusing to make planes for a war machine is one of the ways we serve our country.

The attempted tragedy of this movie – we must build our dreams even though they’re used for evil – fails because it is trying to escape from an even deeper tragedy: That the demands of justice are uncompromising and inescapable, that we do not have the option of building planes and then sighing with regret that they’re used for a war of aggression. 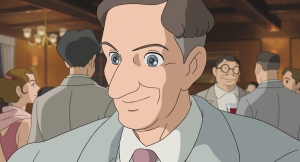 The attempt to do so leads in the darkest directions. Thomas Mann’s 1924 novel Magic Mountain is invoked explicitly in this movie. Hans Castorp himself briefly appears and laments the evils that are arising in the world, wistfully declaring that we can sometimes find a “magic mountain” in our lives where we can forget those evils and find healing – but the evils will always remain. Like that book, The Wind Rises confronts the big questions of the 20th century and is ambiguous about the answers.

But we cannot pretend we’re still in 1924. In The Wind Rises, Castorp doesn’t leave the “magic mountain” to march off into the trenches of WWI; he flees town one step ahead of the secret police. Mann could get away with ambiguous mysticism in 1924, but we who know what came next must not leave things where he left them.

This entry was posted on Tuesday, August 4th, 2015 at 8:35 am and is filed under Pass the Popcorn. You can follow any responses to this entry through the RSS 2.0 feed. You can leave a response, or trackback from your own site.

3 Responses to Pass the Popcorn: The Wind Rises