If the System Can’t Kill the Bunny with $312k per classroom, perhaps new choices will help them out 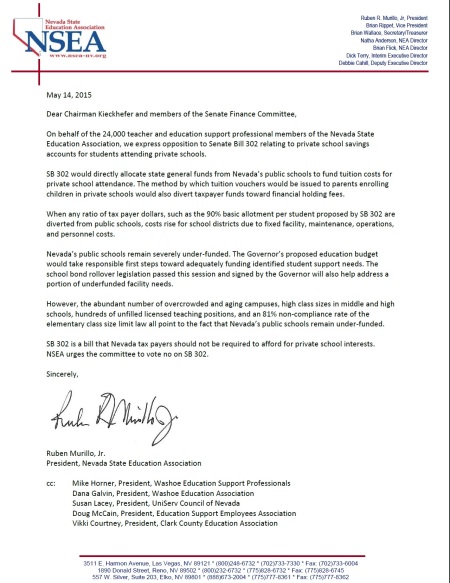 So during the recent Nevada legislative session, Nevada State Education Association President Ruben Murillo Jr. sent the above letter to the members of the Senate Finance committee. In the letter (in case you are squinting) he included the following paragraph:

However, the abundant number of overcrowded and aging campuses, high class sizes in middle and high schools, hundreds of unfilled licensed teaching positions, and an 81% non-compliance rate of the elementary class size limit law all point to the fact that Nevada’s public schools remain under-funded.

Well, that’s a little rich don’t you think? Especially given that the Digest of Education Statistics reports that inflation adjusted current spending per pupil more than doubled since 1969:

Despite this doubling of current funding, there can be no doubt that overcrowding remains a chronic problem in Nevada. National Public Radio recently profiled Forbuss Elementary school in Clark County. Architects designed the building for 781 students, but it currently has 1,230 students, spilling out into 16 trailers. The Nevada public school system has been unable to keep up with either physical or human capital needs-thus the unfilled public school teaching positions cited by President Murillo. In the same NPR piece, a teacher in Bertha Ronzone Elementary School reports having 33 students in an overcrowded trailer classroom.

Now my excel spreadsheet says that if you multiply 33 by $9,455 you get $312,015 in current spending, with more in capital spending. How do you hire a teacher for only $312,015? Sounds like they at least should not have a series of substitute teachers going through those trailer classrooms. But wait, Murillo notes hundreds of unfilled teaching positions. What’s that? Overhead?!? C’mon you’re a BEAR man!

Of course, if you can’t keep up with enrollment growth, can’t build public schools fast enough, can’t hire enough teachers, and create trailer parks outside your schools for extra classroom space, well, you’ve got problems. If the Census Bureau further projects a huge increase in your youth population and the NAEP say you only get a fraction of your students proficient this actually makes an entirely compelling case for giving as much choice as possible. Apparently the Nevada public school system needs as much help as it can get.

NSEA: thanks for the assist!

This entry was posted on Wednesday, June 10th, 2015 at 6:25 am and is filed under Education Savings Accounts. You can follow any responses to this entry through the RSS 2.0 feed. You can leave a response, or trackback from your own site.

6 Responses to If the System Can’t Kill the Bunny with $312k per classroom, perhaps new choices will help them out