Render Unto Caesar what is Caesar’s 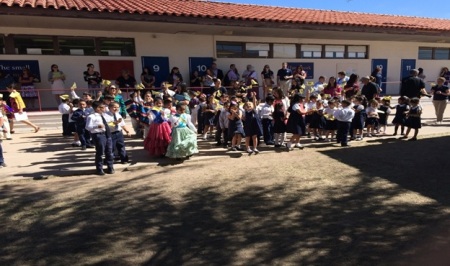 This week I had the opportunity to visit St. John the Evangelist school in Tucson. St. John is one of three Catholic schools on the south side of Tucson that entered into a partnership with the Alliance for Catholic Education at the University of Notre Dame.

It was a deeply gratifying visit.

Greatschools rates the academic performance of nearby public schools as 2 out of 10 stars. St. John’s student body draws from an area of Tucson that is overwhelmingly Hispanic and low-income.  In the capital city of Phoenix, one frequently talk about how the RAND corporation found that if you “control for demographics” that Arizona NAEP scores are middling rather than rock bottom. This of course is a coded way of at least implying that we should not expect students like those filling the halls of St. John’s to learn.

Fortunately the St. John’s children are having none of such nonsense. I walked in to a kindergarten classroom, where I was greeted by a young man with a hand-shake.  He announced to me:

My name is Caesar and I am going to college in 2026!  Today we are studying letters and words.

I’m sure you can guess my reaction, something along the lines of:

The staff provided some details on the progress of the school during the partnership period. Through the hard work of the students and the faculty, both scores and enrollment have strongly improved.  The University has leveraged their network to create tax credit resources for the schools.  It is difficult work, but they are on their way.

Christian Dallavis, the Director of Notre Dame Ace Academies, provided the following slide as a part of a presentation at the American Enterprise Institute earlier this year.  The slide is a representation of the decision tree used by Ace Academy folks to discover which of the Arizona choice programs for which students may qualify. 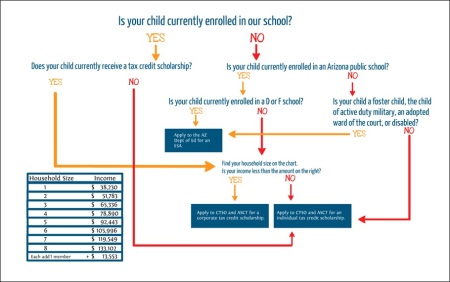 If that looks more than a little convoluted, it is only because it is in fact convoluted. During the last session, choice advocates suffered an unfortunate setback in the Arizona House. Choice champion Debbie Lesko attempted to pass a provision to allow children living in high poverty zip codes to participate in the ESA program. Given that the entire state testing system is currently in complete chaos without anyone knowing even what test will be given to students next year, the D/F rated school provision seems more than a little unstable.

Now the alphabet soup groups are seizing upon a drafting error from last session in an effort to turn the minimum funding for general education students from $4,800 to $3,200. Mind you that the districts get around $9,000 per child. The Superintendent of Public Instruction has publicly stated that the legislative intent of the law is clear, but the alphabets blocked clarifying language from passing in the legislature and have threatened to file suit against the department if the Superintendent follows the clear intent of the law.

I know some of these opponents well enough to say with some certainty that they could not possibly see what I had seen, look students like Caesar in the eye, and tell him “Sorry Caesar the dysfunctional system down the street needs you as a funding unit.  I hope that whole 2026 thing works out for you somehow but the needs of the system come first.”  The basic humanity of choice opponents would prevent them from doing such a thing, but the actions of their organizations seek just such an outcome.

Caesar deserves a decent shot to succeed in life.  Arizona policymakers should do everything they can to give it to him. Moreover, we should give thanks that institutions like St. John’s are willing to work so hard to help him achieve his potential.

UPDATE Superintendent of Public Instruction John Huppenthal released a statement today saying that after careful study of the statute and consultation with legal counsel that he has instructed Arizona Department of Education staff to fund the ESA accounts in accordance with the legislative intent of the 2013 statute. Legal action designed to strip additional funding from students like those described above will commence in 5, 4, 3, 2…

This entry was posted on Thursday, May 1st, 2014 at 4:57 pm and is filed under Education Savings Accounts, tax-credit scholarships. You can follow any responses to this entry through the RSS 2.0 feed. You can leave a response, or trackback from your own site.

8 Responses to Render Unto Caesar what is Caesar’s