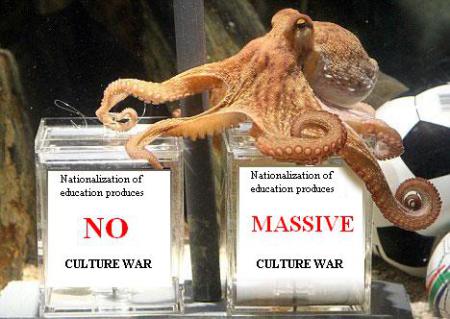 Paul the psychic octopus sez: “Did I tell you so? Let me count the ways.”

And so it begins! Over on NRO, Heather Mac Donald is stirring up a culture war over the new national science standards:

One doesn’t need to be a global-warming skeptic to be appalled by a new set of national K–12 science standards. Those standards, developed by educrats and science administrators, and likely to be adopted initially by up to two dozen states, put the study of global warming and other ways that humans are destroying life as we know it at the very core of science education. This is a political choice, not a scientific one. But the standards are equally troubling in their embrace of the nostrums of progressive pedagogy.

I’m sure Mac Donald is right – I certainly trust her more than I trust the cronies who are writing the standards. But the larger picture here is the dramatic increase in the politicization of school curricula that national standards inevitably creates. Of course, the very existence of the school monopoly is itself a neverending geyser of political headaches and occasional massive warfare over the curriculum. But nationalization multiplies the problem a hundredfold.

This entry was posted on Friday, April 12th, 2013 at 3:11 pm and is filed under National Standards. You can follow any responses to this entry through the RSS 2.0 feed. You can leave a response, or trackback from your own site.