If Teachers are Underpaid, Why Don’t They Earn More When They Move to Other Professions?

[Note — AEI’s Jason Richwine noticed my post urging people to read the debate in Education Next over how to assess teacher compensation.  He asked if he could submit this post to address an argument raised by Mishel and Roy that he did not have the space to respond to in Ed Next.]

The fall issue of Education Next features a debate: “Are Public School Teachers Underpaid?” Andrew Biggs and I contributed an argument based on our report released last year, while Lawrence Mishel and Joydeep Roy from the Economic Policy Institute (EPI) offer a rebuttal. Unfortunately, Andrew and I had only 300 words for our subsequent rejoinder, so much of their critique went unaddressed.

One of the points we made in our original piece is that EPI’s underpaid-teacher hypothesis generates a testable prediction: If teachers are underpaid relative to their skills, teachers who leave the profession should, on average, earn more in their new jobs. Likewise, new workers coming into teaching should, on average, take a pay cut from their previous jobs.

Andrew and I showed that, if anything, the opposite is true: Individuals get an average salary increase of 8.8 percent when they enter the teaching profession and a pay cut of around 3.1 percent when they leave. 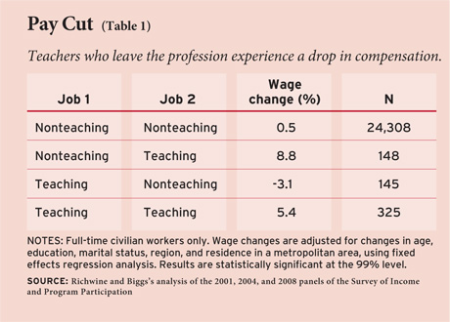 Mishel and Roy confirm our empirical finding. In fact, they add that ex-teachers typically do not become engineers or chemists—they often become “librarians, cashiers, secretaries, and clergy.”

This would seem to cast strong doubt on the underpaid-teacher hypothesis, but Mishel and Roy don’t interpret it that way. They point out that just 1 percent of teachers actually leave for a different profession each year, and those who do leave tend to be making the lowest salaries. Therefore, they argue, we can hardly make inferences about the skill level of the average teacher based on this tiny, unrepresentative fraction. They don’t explicitly say that leavers have below-average skills, but the implication is needed for their argument to make sense.

I agree that teachers who stay could be more skilled than teachers who leave, but possessing these allegedly greater skills clearly does not compel them to seek higher salaries in the private sector. That was our point. If teachers are insufficiently compensated for their skills, we would observe teachers – particularly those with greater skills – leaving for higher-paying jobs. But despite all the anecdotes, the data just don’t show that happening.

In fact, Mishel and Roy’s response to us on job switchers is something of an own-goal. They are saying that, despite their own claims about teaching being underpaid relative to other professions, just 1 percent of teachers actually leave for a different profession each year. And that 1 percent may be made up of the least-skilled teachers. So tell me again why we need to raise teacher pay across-the-board…

This entry was posted on Tuesday, September 4th, 2012 at 5:12 am and is filed under teacher pay. You can follow any responses to this entry through the RSS 2.0 feed. You can leave a response, or trackback from your own site.

12 Responses to If Teachers are Underpaid, Why Don’t They Earn More When They Move to Other Professions?